I did not come up with the idea of cleaning messages into the sidewalk dirt. It’s been done before, sometimes called “reverse graffiti.” A bright young woman who I was hiring to flyer for me suggested the idea. I wanted to try it partly because it looked like fun and partly because I was looking for cheaper alternatives to chalking. Each chalk protest costs about $700 because of the amount of chalk we use and the cost of transporting and feeding the people. Chalking also took a long time, about three hours on average. The spraying would take minutes.

There are several videos on Youtube on how to do it but they seemed to require local water pressure and source. I enlisted my engineer friend, Chris, again to help me with the technical aspects. We strapped a rain barrel onto my truck and bought a power washer. Nothing came out but a dribble though. The gravity from the rain barrel was not enough water pressure. Chris found an old sump pump, stuck it in the rain barrel but long story short, the pressure was going in and out. We had to buy a more powerful sump pump and a generator to power it before we had consistent pressure. 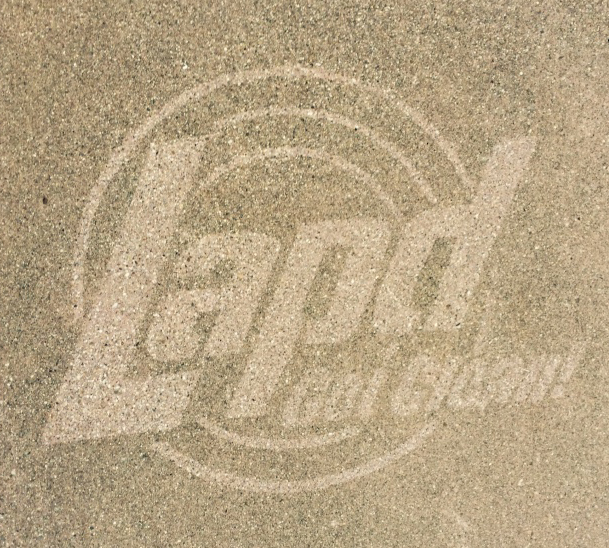 We played around with stencils. First we used plumber’s matting but the power of the water just lifted up any loose corners. We needed something stiffer. Luckily, Chris used to work with metal so we bought sheets of aluminum.

We went over to Alex Shaefer’s to work on a design. We looked at a lot of cleaner adds. They almost all have some kind of swirl and a forward slanting, sans serif font. The first one Alex did was based on the Tide logo but when we cut and tried it out, the detail was too fine. It was hard to read the “Get Clean!” part.

Bigger letters solved the problem. I also discovered that the power-washer would literally dig a hole in blacktop. That was good to know since vandalism wasn’t the goal. Power-washers are actually kind of dangerous. The stream can take the skin off the top of your feet or even kill you by pumping water under your skin. Work boots recommended. 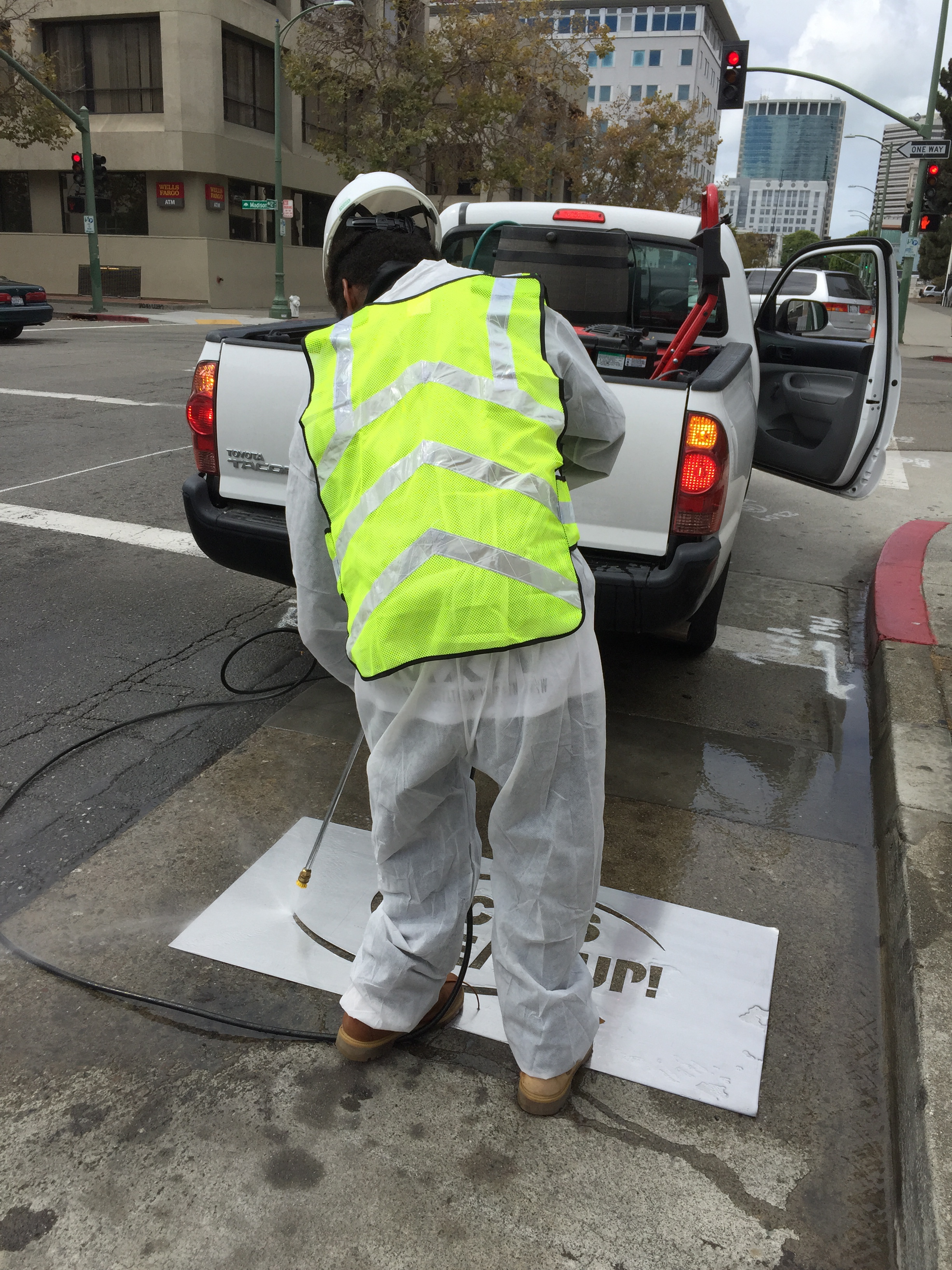 We were almost ready to try our first spray. But first I went online and bought some cheap coveralls, safety vests and hard hats. With my white truck, we now looked just like city workers. We were invisible. We called ourselves SprayTeam6 after Seal Team 6 and after the hacker group Dox Team 6.

My cousin, Noel, and I scouted out our first location–downtown LA, the sidewalks across from police headquarters were filthy. Filth is essential for the technique to work. We practiced the route where we would stop and spray several times. Noel, Alex and I were the first spray team. The pull chord on the generator is too hard for me to start so I need a man. We got it all started and kept it on for the whole adventure since it’s difficult. Luckily the power-washer chord is long enough that nothing has to come out of the truck. Mission accomplished. 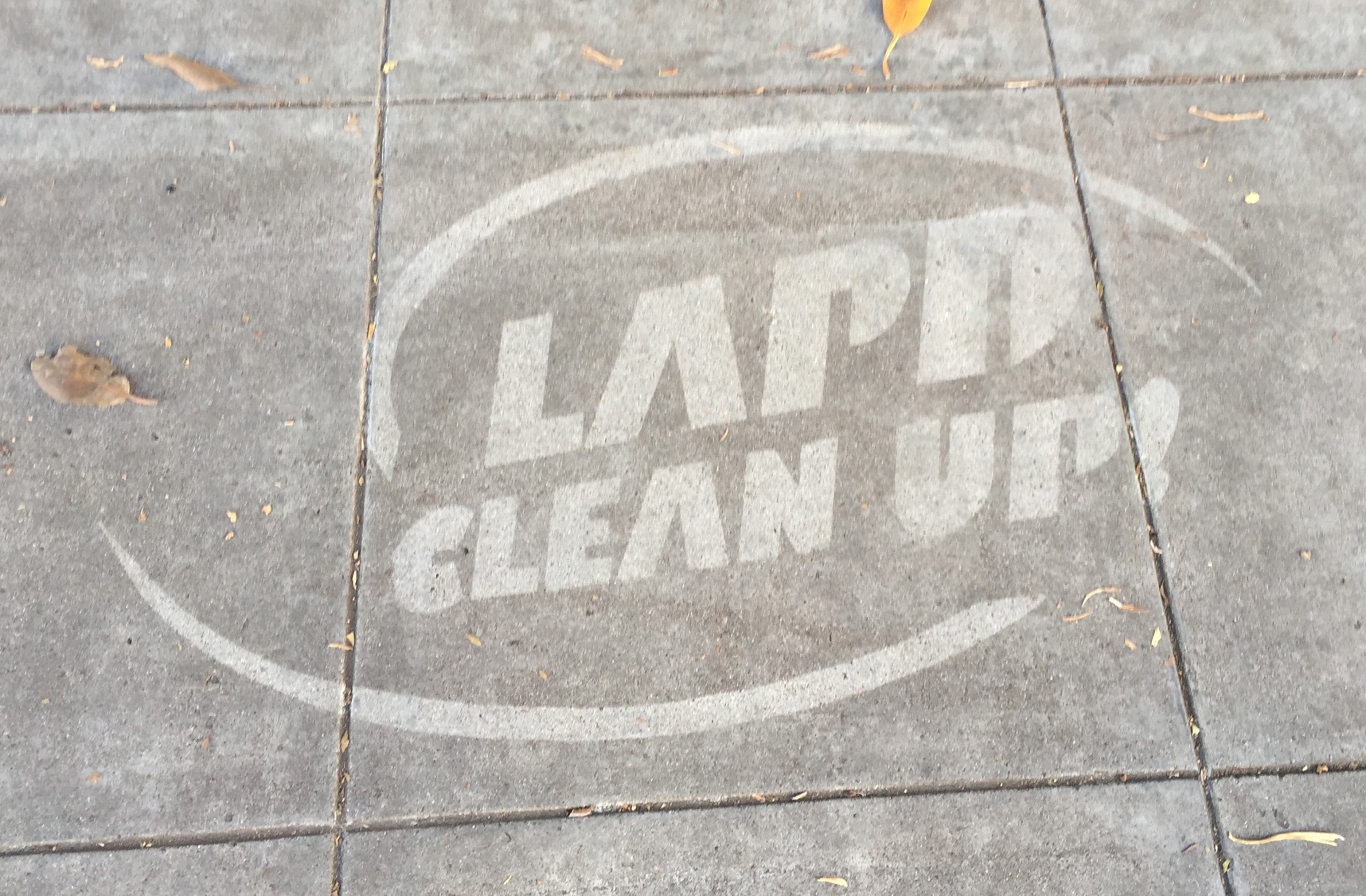 Next time it was in Oakland. I filled the barrel in LA and drove all the way without incident until I was almost there and then I hit the break and about 1/3 of the barrel full of water went sloshing out into the back of the truck. Luckily the power washer and generator survived.

My friends Teardrop and Fox were the next spray team. We sprayed the jail, the courthouse, police headquarters, the cop bar, the probation office and in front of our friend’s house without incident. Police cars drove by more than once.

As I left my friend’s house to go back to LA, the street was blocked off by a SWAT team but it wasn’t for us. Just another day in Oakland.