This entry is part 7 of 18 in the series Jubilation

Not every city handles Chalkupy as graciously as Oakland does. In LA, Austin and elsewhere, people, children even, are being arrested.

The mayor of LA enjoins his city to “Chalk the streets!” for Lance Armstrong’s newest gig but allows police to arrest people who chalk critically of governments and banks. Alex Shaefer is arrested and charged with vandalism in front of Citibank at about the same time at the monthly, downtown Art Walk. Chalk activists are tear-gassed and shot with rubber bullets. We decide to come chalk for the next Art Walk or what will be “Chalk Walk.”

Oakland begins planning our LA visit with the help of Occupy LA and Activist Richard Florence. It took 2 trips just to get a good map of the Pershing Square pavers. They are really complicated, in this woven design that kept confusing my eye and the map had to be exact or the design will go haywire. 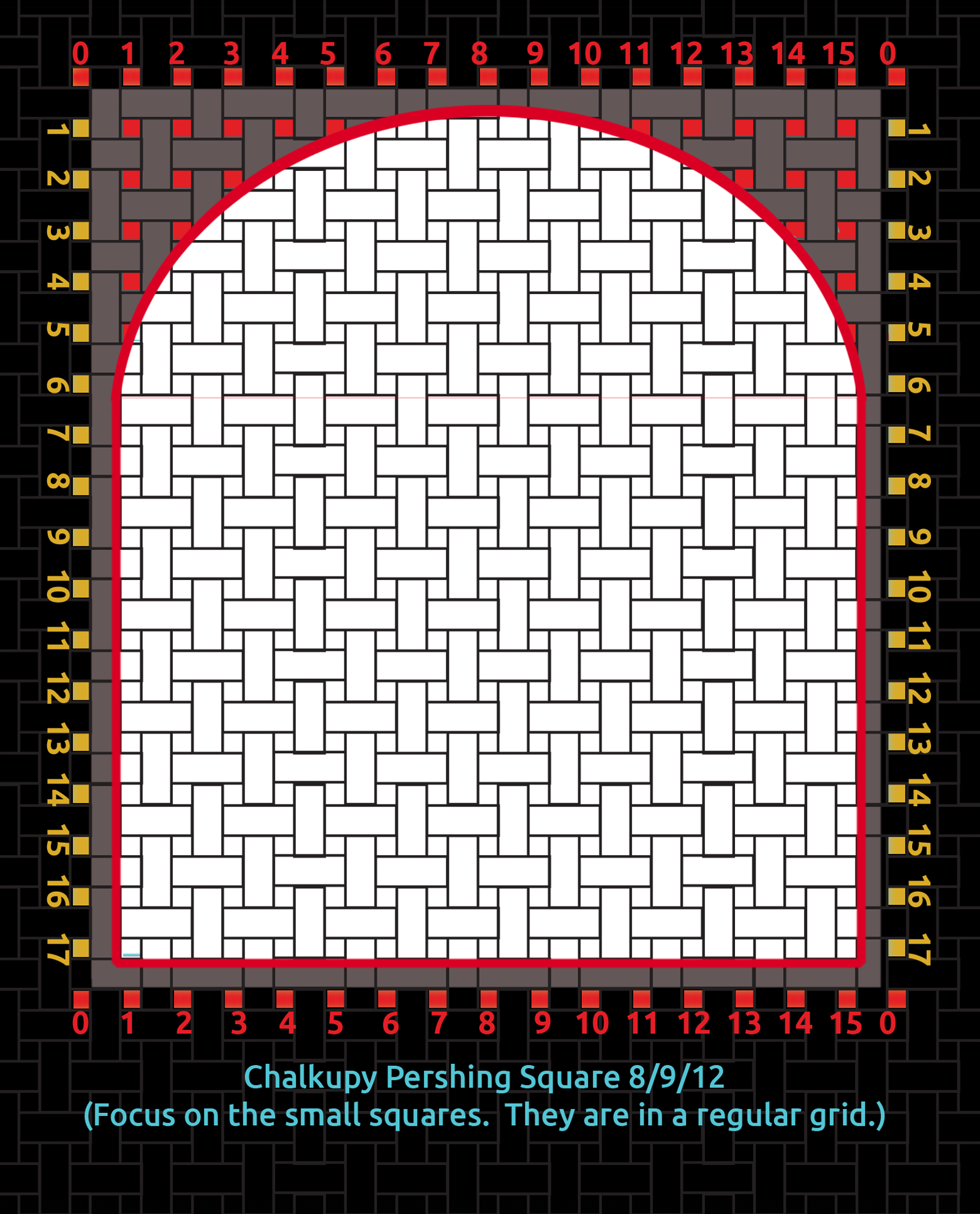 Unsure of where we stand with the law (the key word in the California vandalism statutes is: DEFACEMENT)–Does that mean it’s an art competition? As long as our art is “GOOD” we theorize, we should be able to get away with it?

Meanwhile, I post “Here comes Oakland!” on a couple of LA chalk protest sites to mixed reviews. Some look forward to meeting Melvin Kelly and DJ Occupy, both Occupy celebrities in their own right, while others make dire prophecies of shields and gas masks.

Twenty three Oaklanders arrive in a big, black bus on the night before Chalk-Walk where Occupy LA is holding a general assembly. We wear Hawaiian shirts and silly props: animal costumes, party hats and such, ruining rumors of shields and traditional anarchist photo opportunities for the press. I believe that tone is everything and that setting the scene can be accomplished by props and language. I remember seeing about 1,000 angry, Oakland protesters turn around and end a confrontation after a cop finally said, “Please.” 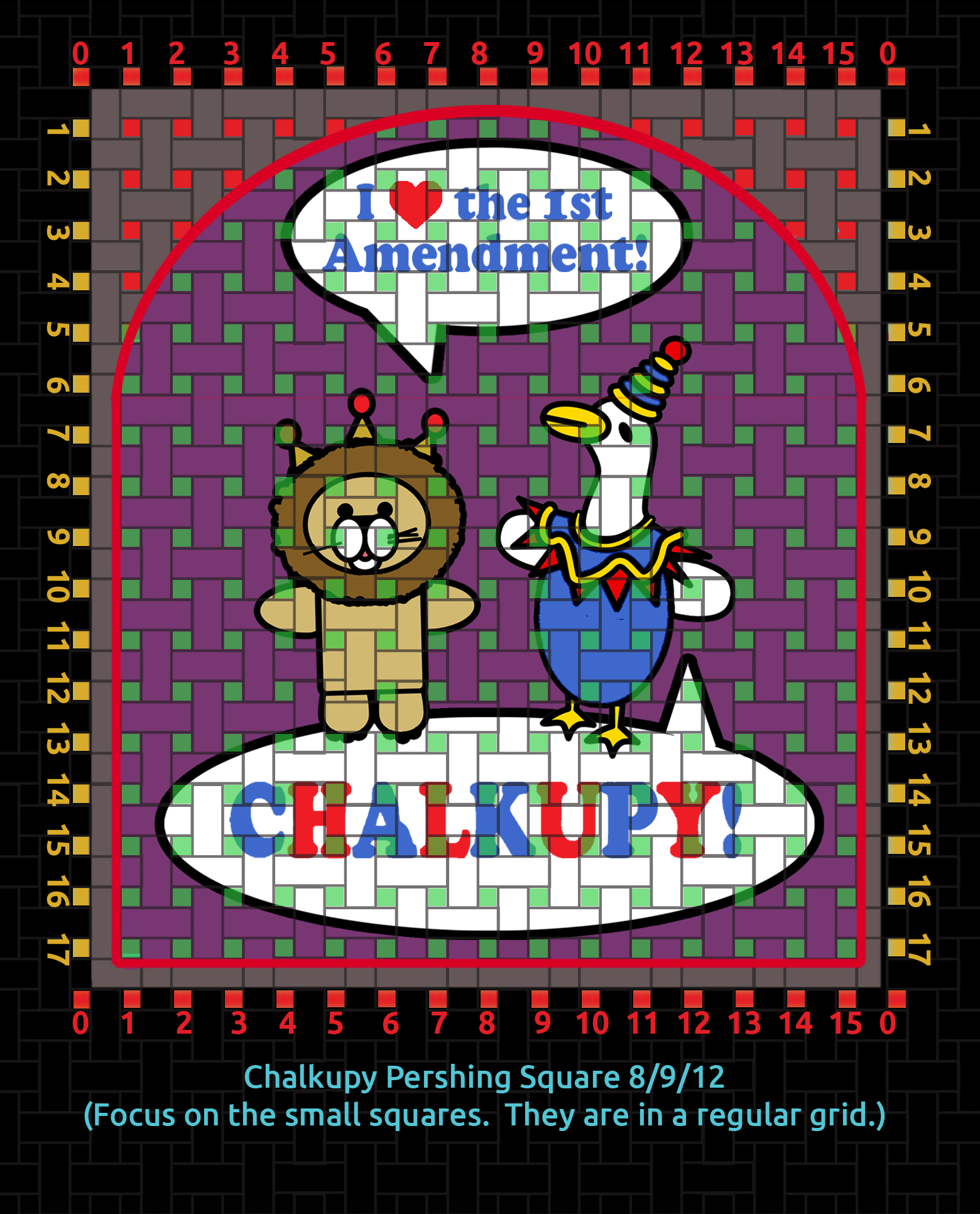 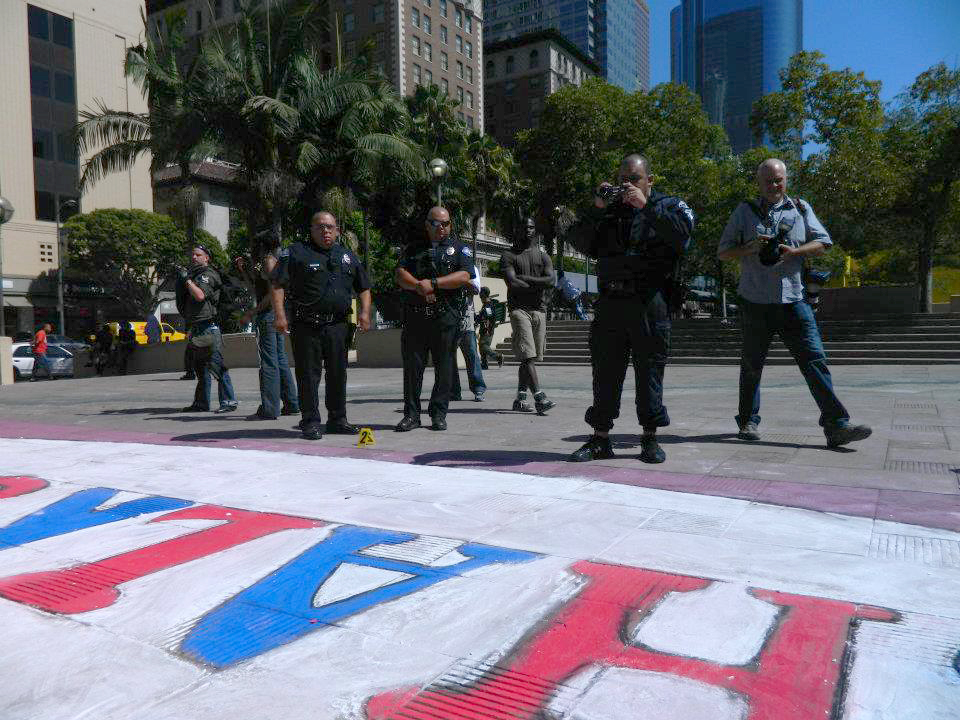 I think the authorities expected us the next evening but we were at Pershing Square chalking at 9am and finished in a record 46 minutes (timed by live-streamer, Courtney Occupy who had come on the trip with us along with PFailblog and PunkBoy.) Livestreaming is important to protesters because it gets the truth out and bears witness instantly, before facts can be changed or cameras confiscated.

Police arrive and begin to pile up behind us and we ignore them focused only on finishing. There are 2, then 4, then 10 or so. Those of us who can not afford to get arrested begin to disperse as per our plan to our secret hiding place which is a room at the Biltmore hotel. 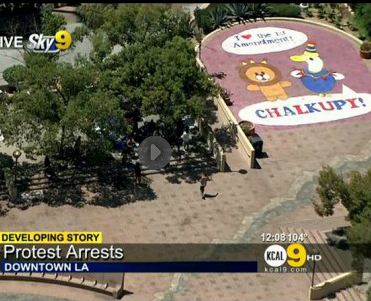 When asked who is in charge, several people spontaneously reply: “Nobody, we just follow the map.” It is during the second trip to the bus with our tools that three of us, Fox, Scooby and myself are detained and put in handcuffs. News helicopters hover above, shooting our First-Amendment-loving Lion and Duck. One news report mistakenly calls the lion a bear. Another claims that a fight had broken out between Oakland and LA chalkers, which is complete network fiction.

After being told by police that “our little game wasn’t going to work,” they release Scooby and myself but keep Fox on a fake warrant that later disappears, probably because of his Crips tattoos. As the bus pulls out, leaving the hiders to hide while the police looked through the Biltmore lobby for hours, never imagining we have a room, we manage to lose one of our members in the confusion since we have two Chris’s. After hours of anxious waiting and looking for him at the hotel and on the inmate locator website, he appears, having dumped his coveralls and taken the bus back to our motel. We get our first ever helicopter’s eye view of one of our chalks. 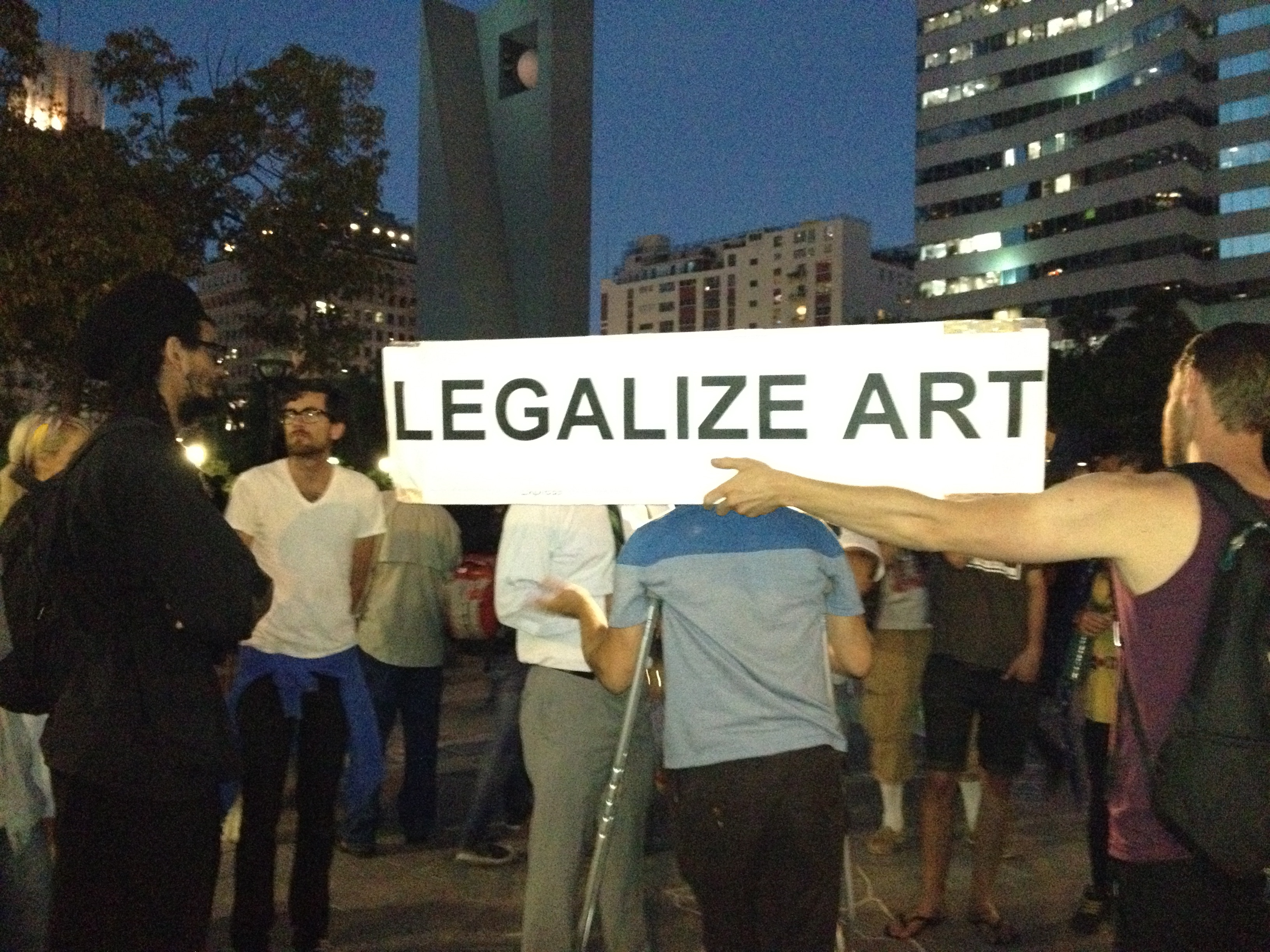 We can’t bail Fox out until midnight so we try to enjoy the press coverage and the motel pool while we wait. When he finally is free, it turned out that he had had a good old time in jail, as a TV news celebrity, because there is a TV in the cell. One of the guards decides he looks like Montel Williams and since they have the same last name, asks me if they are related. I answer: “Yes, he’s Montel’s nephew and in fact, Montel paid his bail.” The guard runs to offer him a soda while he waits to be released, which he refuses.

Chalk Walk is declared a success, a no-violent, chalk party where a good time is had by all. Our drawing is allowed to remain for a while, having been declared “good art” by an LA police spokesman, thereby reaffirming my belief that the word “defacement” implies an art competition. We return to Oakland, proud and happy.