I thought back to the “instructions” Malidoma Patrice Some had given me during our illuminating session together back in the fall of 2011. His idea that I should create “a new sense of home and power and belonging,” was one I’d taken to heart, and felt was well underway with the creation of The Brooklyn Cottage.

“From there,” Malidoma had added, “you’ll be given the opportunity to contemplate how to help others view their circumstances–not from a reckless, tragic perspective but from an initiatory one.”

Hmmm! I’d learned a lot about grief, surrender and rebirth from my experience of divorce, and realized I had something to share. So I sat down and put together the outlines of a workshop–a thing I wished had been available to me when I was walking through the worst of my own fire–and in September of 2013 offered it as a Brooklyn Cottage event. 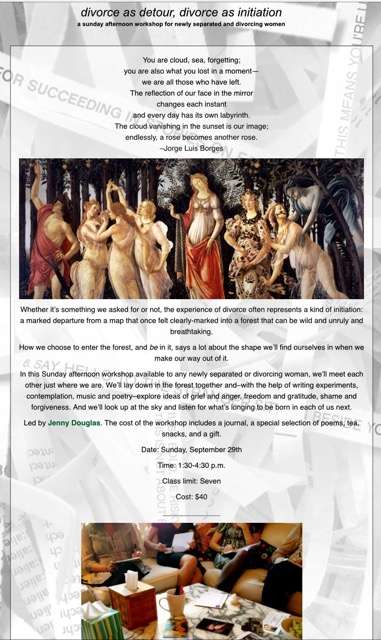 Two years later, I lead versions of this original workshop for both the Academi of Life and UnTied, and in a few weeks will be driving up to Westchester to facilitate one there. The workshops sell out quickly. Something important is happening there.