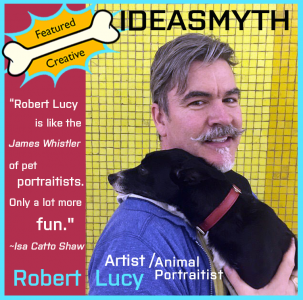 People were always asking me: “When are you going to paint Ruby?”

Ruby was a bearded collie, and my soulful companion since she was a puppy. When I moved to New York, Ruby came with me of course and, though I was concerned about her adapting to the big city—she was from the Oregon Coast and loved the outdoors—she took to New York like a trouper. She and Chris bonded and we became a very tight, loving family.

Ruby was a gorgeous creature—walking her on the streets of the city, she would stop traffic with her flowing coat and beautiful gait. One of our nicknames for her was, The Lady. Funny thing was, she wasn’t vain in the least and wasn’t the sort of dog who relied on people’s attention. She wasn’t snooty—but she was confident and self-sufficient.

Ruby’s health deteriorated in the last year of her life, but fortunately we were able to give her a nice, quiet retirement by moving from Manhattan to the woods of Woodstock, NY, where she slept in front of the screen door everyday.

So, “When are you going to paint Ruby?” 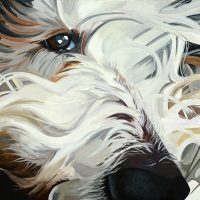 I was always busy painting other people’s dogs, and besides, I guess I just felt too close to her to paint her. And, I had the real, live thing in my life every day.

They say that dogs leave their packs to go off and die. But Ruby was never without us, so she waited until we were out of town on work to make her exit. This was 2 weeks before my boyfriend Chris’s 50th birthday, so when we got home, I rushed to finally make the long-awaited portrait of Ruby as a gift for him. It was a gift for me, too, to spend that time looking at her and meditating on her. I chose an extreme close-up photo to convey the intimacy I felt with her and the way we know our animals, in close-up. Her portrait hangs in our bedroom and we both love being reminded of our dear Lady every day.