This entry is part 10 of 18 in the series Jubilation 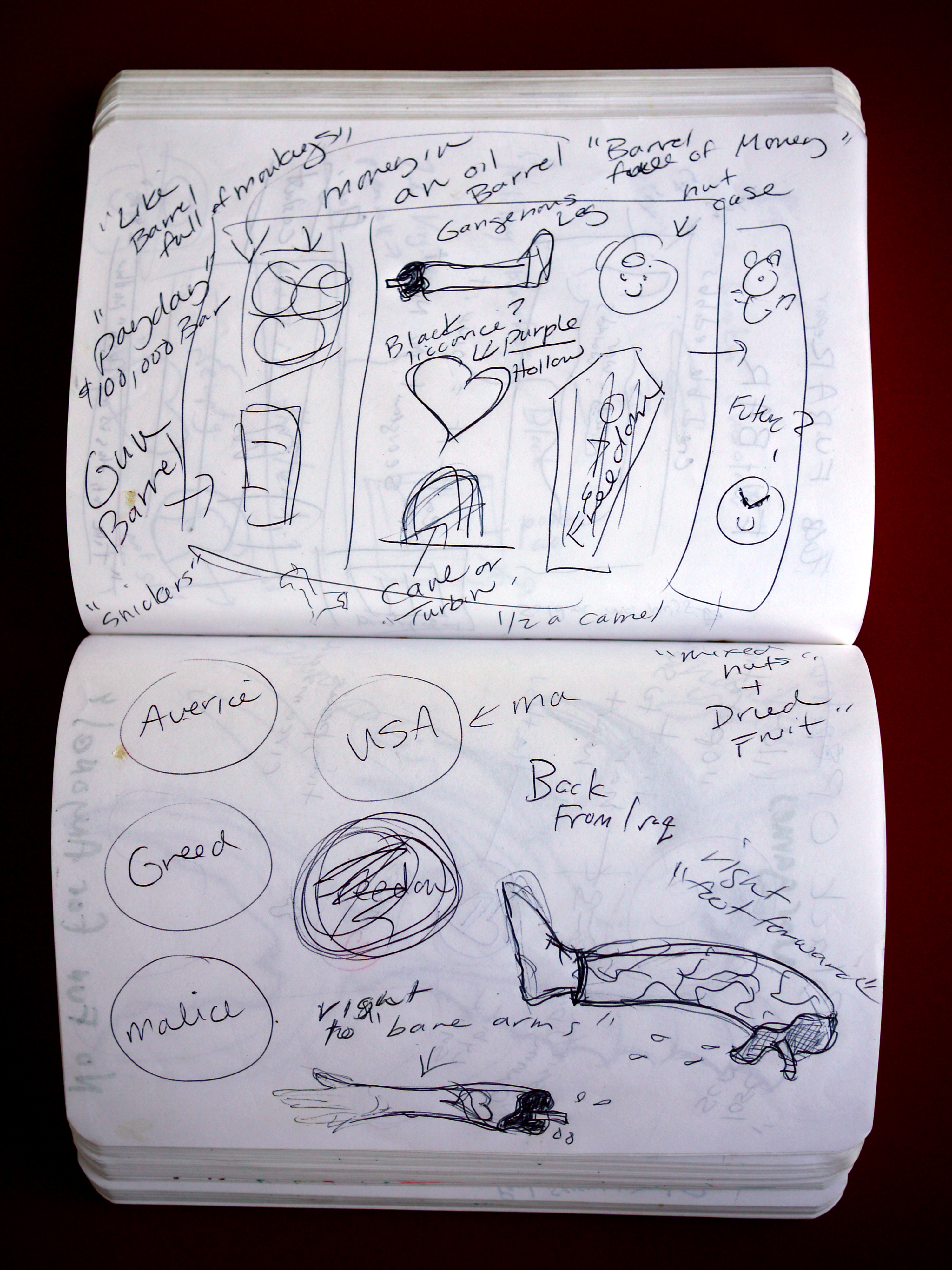 The FUBAR was actually my friend, Seth Lehr’s idea. Seth works for Peace Action West and he often has suggestions for me. In this case, he even drew a sketch. His idea was a chocolate candy named after the military acronym that stands for “Fucked Up Beyond All Repair (Recognition or Reason).”

In the end, I didn’t make all the limbs and parts shown here because it was too hard to make the box with all the little custom-shaped limb holders. Instead, I did a whole soldier missing a leg. It took lots of tries because I’ve only done four sculptures in my life. I got everyone around me to try one. 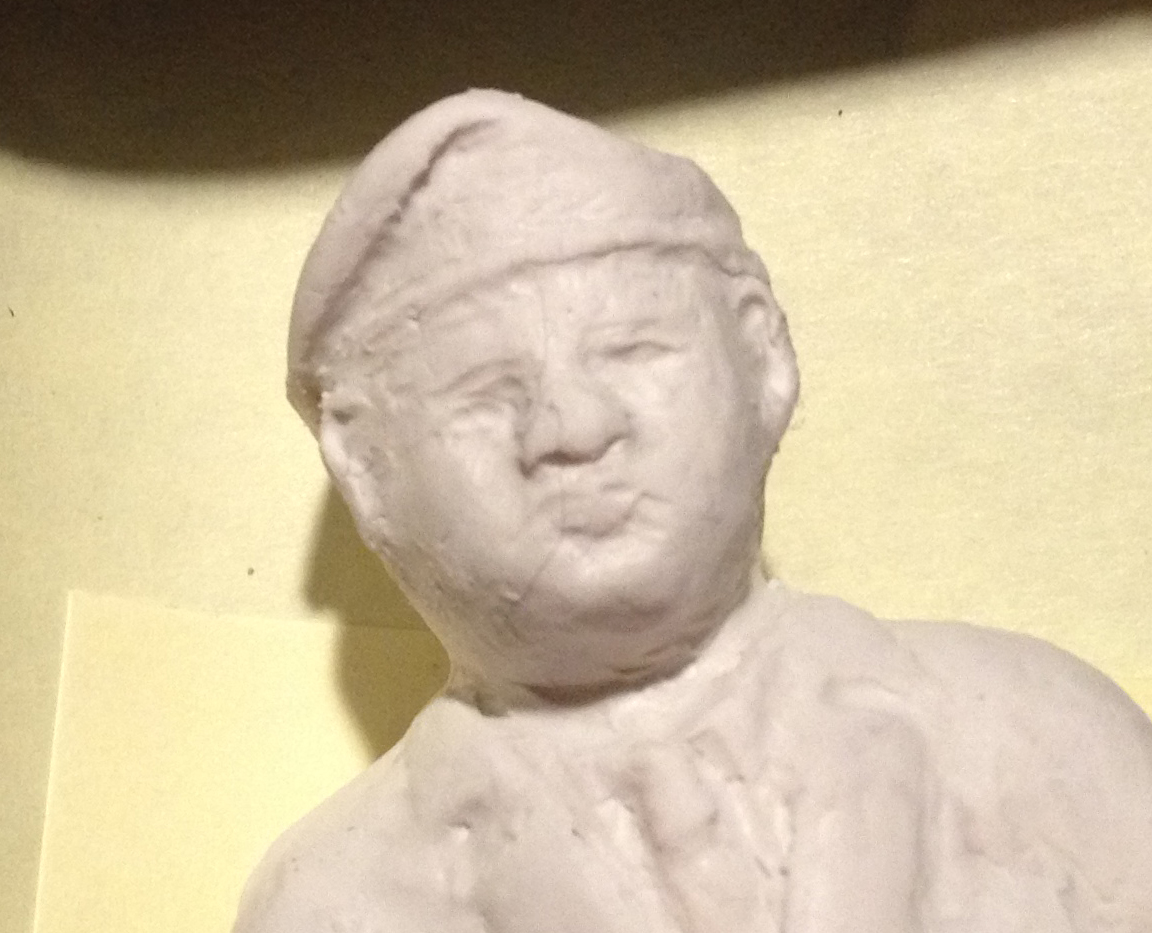 Making a candy mold was harder than I thought it would be. The first silicone mix worked great but it was apparently unfit for making food with, so I had to use another that was much harder to use. It had to be in a controlled environment–the right temperature–or it wouldn’t harden and it had to be in a gas chamber with a vacuum pump to suck out all the bubbles. Instead of floating, the soldier sunk to the bottom so that we had to rig a suspension system to hold him up while the silicone dried.

I looked long and hard for the special Hershey’s chocolate that was sent to Iraq with our vets that had a much higher melting temperature than normal chocolate but to no avail. I ended up using chocolate “melts” that they sell at the bakery store. Chocolate is very temperature sensitive and must be “tempered” by  slowly cooling it while stirring and pouring at exactly the right temperature or bad things will happen. 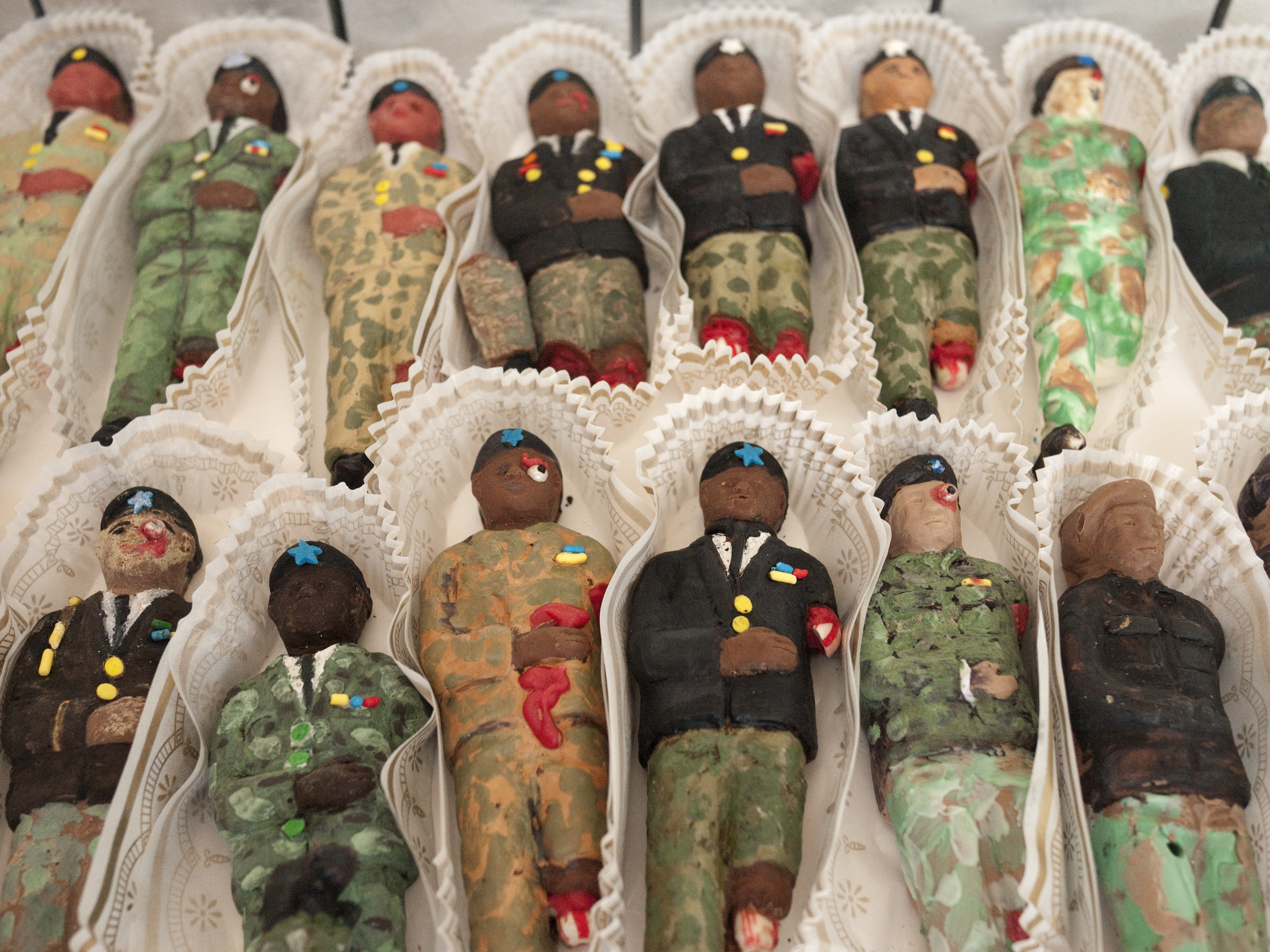 I am pretty into fashion, so I played around with the outfits, adding medals, buttons and gore

WARNING: While each FUBAR is created entirely from materials labeled fit for human consumption–and so can technically be deemed edible–the producers are not certified or licensed to produce food items. 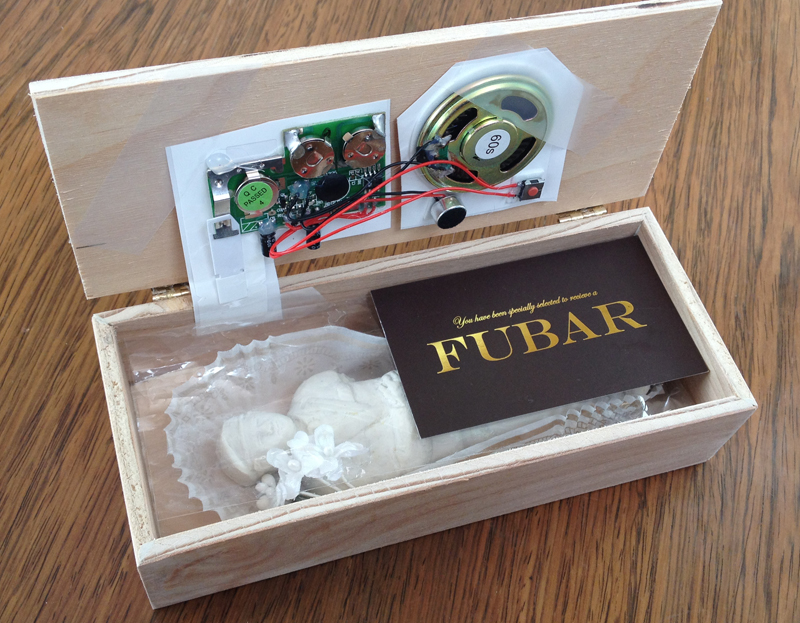 Each soldier got a candy-cane leg-stump, which luckily fitted perfectly into the mold. I was unsuccessful in finding a coffin-shaped box, so my friend, Chris Lingan, had to make the boxes by hand. The real dead soldier coffins are not tapered and are made of metal so we painted them silver. We then attached a sound device, like the ones that come in greeting cards, to the coffin lids so that when each coffin opened it would play the FUBAR song that went. “You fucked up, you deserve, a FUBAR.”

Each soldier received came with a bouquet of flowers and the below chocolatey brown  card embossed with gold letters.

I then created a video [Ed. Note: Warning for graphic content] and press release: 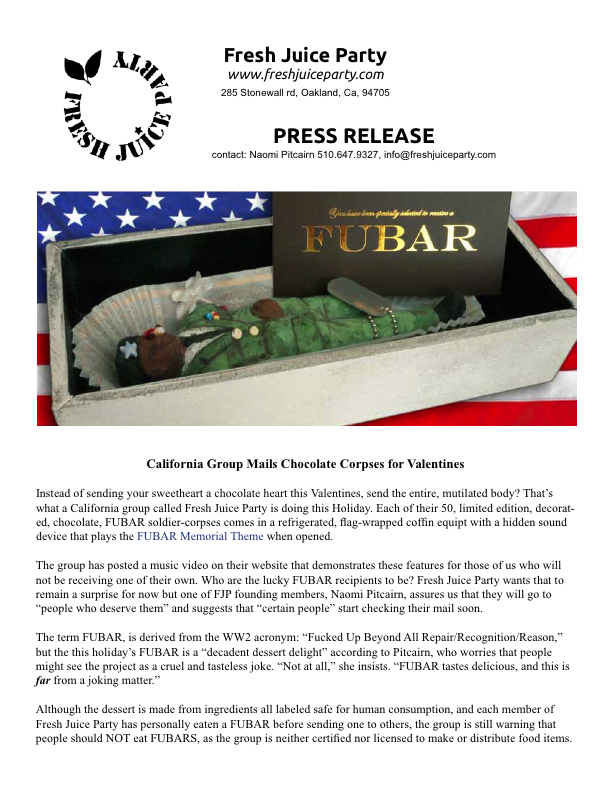 Not everybody was interested. I learned that whoever answers the phone at any news agency has the power to decide whether or not to put you through to a reporter. This was the first time I’d ever done a story that wasn’t out in public and needed to be sold. We gave 50 FUBARS to Code Pink who gave them to various members of Congress.

Several of the people who I have given FUBARs to have admitted to me that they have eaten them in the middle of the night. Even though they were not very good, I understand. I have eaten all the ones I had left, myself.