This entry is part 18 of 18 in the series Jubilation

Last Thursday (12/3/15) National Nurses United, a large and powerful nurses union, held a climate awareness rally in Pershing Square.“Nurses in the U.S. and around the world recognize that bold action is needed to challenge the political and economic power of the fossil fuel industry to win health and environmental justice in our communities, to mitigate global warming, and avert a full-scale climate crisis,” said National Nurses United Co-President Deborah Burger, RN.  “The climate crisis is a public health crisis – it is already causing immeasurable human suffering and social devastation. Whatever the outcome in Paris, nurses will continue to work in our communities, nationally and internationally, to build the movement for environmental and climate justice; the health of our communities and our planet depend on it.”

They were excited to have us chalkupy until the Peshing Square park authorities told them that if we chalked their rally would be canceled and we’d be arrested for vandalism.

Rather than violate their permit, we decided to chalk on Friday instead. Then, a friend of ours, Anabella, introduced us to Sgt. Baker of LAPD who told us that the city attorney had ruled that chalking wasn’t vandalism and that the park officials were not being truthful.

We immediately went to challenge the park officials. They claimed it was a permit issue so we said “fine, we’ll chalk tomorrow when there’s no permit required.” They asked that we apply for a permit which we refused to do. Permits actually make you more vulnerable to arrest, if you violate the terms of the permit.

Ms. Galbraith asked, “Can you just work with us, Please?”

We showed her the art which she declared beautiful.

“What don’t you like about it?” we asked. “What would you want us to do differently?” (Besides get a permit!)

“Come chalk on Saturday when we are having a children’s party.”

“This is the best thing that happened to me all week,” said the other park official, Louise Capone. “You are part of the team now.”

OK. Not sure how that happened but here we are. They also left the chalk up instead of washing it away immediately like before.

What happens when chalking is accepted into the mainstream? Not sure but it looks like we’re going to find out. 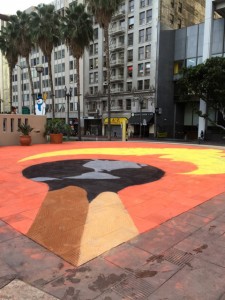 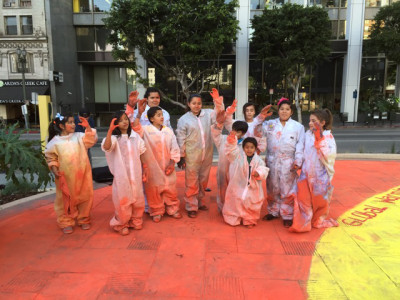