I have children – boys, to be exact. And boys will become men. And men will have jobs (hopefully). (In my family, there’s an established tradition of men who quit their jobs after they married independently wealthy women who’d inherited money.) (But, before they stopped working, the men in my family had jobs that were good enough to put them in a position to meet those wealthy women—so even a hustler needs one good gig.) So a few years after my first son was born, I looked at him and thought — in an uncharacteristic moment of prescience (terror clarifies the mind that way) – one day, he’s going to grow up and get a job, and part of growing up will be to ask me what I do for a living. Of course I ignored that prescient thought, as I often do when faced with terrifying foreboding, and went on about my day (and, frequently, night) writing motivational speeches for corporate executives. Change and growth are very inconvenient, I find. I had a wife and child to support; a lifestyle to maintain. And I am to lifestyle maintenance what Malcolm X was to political change: by any means necessary. As long as it pays well. So yes, some of my clients were pharmaceutical executives who – reading between the lines of their furrowed faces – signed off on experiments that required torturing dogs in soundproof subbasements to discover new drugs, but no, that didn’t stop me from writing speeches for them. Does a dog really bark in a soundproof subbasement if no one can hear it? 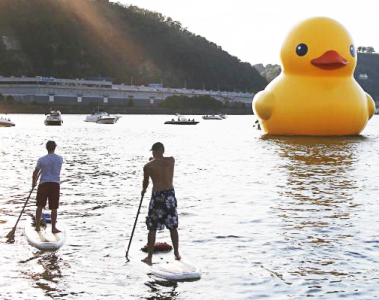 When you’re on vacation, life is as carefree as a rubber duck.

Some might say I lacked an internal governor i.e. a sense of right and wrong i.e. a soul; for example, my then-wife. But she – like I – was able to overlook the long-term consequences of unprincipled, soul-killing work for the short-term benefits of material success: an apartment on Central Park West; private schools for the kids; 3-week vacations in the Caribbean; and a platoon of therapists and marriage counselors to beat back the demons.

Then my son started talking. And one of the things he said, while looking at me overlooking Central Park while typing on my laptop, was, “What do those buttons do?”

It was at that moment, in a glorious building with at least two movie stars living in it (ok, on higher floors in bigger apartments), that I wanted something more than money: pride. Yes, it’s awesome to be able to take your kid to the tropics for a week. Or two. Or three. But it would be even more awesome, I decided, to be able to tell my son that I did something with those buttons that I believed in, in and of itself – not just for what it could get us.

He would come to regret those words, my son. (“The downside of being wealthy when you’re a kid is that you don’t appreciate it,” he once told me while walking past our former building.)

On the other hand, we once met a movie star together, in a restaurant near our new, humbler home, rendering my son speechless and me non-plussed. Afterwards, my son asked, “How could you not get nervous?” I said, “Because I believe that what I do is just as valuable as what he does.” Which is something I could not have said on Central Park West – and which felt better than a beach chair in St. Bart’s. 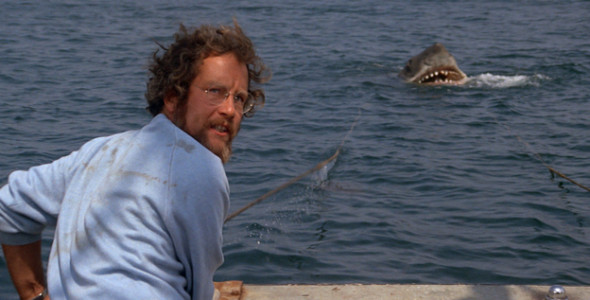 Richard Dreyfuss having a bad day at the office in 1975.

~~~James Braly is the writer and performer of the monologue Life in a Marital Institution, which premiered at the Edinburgh Festival Fringe, sold-out 59E59 Theaters in New York City, and transferred Off Broadway to the Soho Playhouse. Reviewed as “gaspingly funny” (Variety), “never less than excellent” (The New York Times), and “a masterpiece of storytelling” (The List), the show has played over 120 performances and is currently on tour around the country. Learn more about James at www.jamesbraly.com