In April 2012, we picked Dirt as the theme for the Brooklyn Cottage’s second month of operation. The artist Will Kurtz taught a sculpture class using dirt from my back garden. We hosted an evening of Dirty Storytelling. And we held a cooking class, led by the immensely talented Cali Rivera. (When I passed along the theme to Cali, he promptly replied: “No problem, we’ll do a cooking class focused on food grown in the ground.”)

The Brooklyn Cottage’s cooking students that night wore aprons bearing fragments from our last two storytelling evenings. (In the photo below, Diery Prudent wears an apron that says, Human beings, not doings. As I shared at our storytelling gathering the month before, my mother has long made a point of reminding me this.) 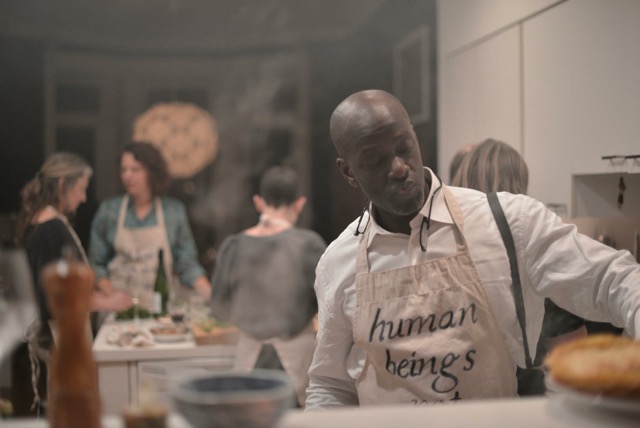 Diery at a cooking class

Future themes would be Family, Work, Doubt, Lust, In-Progress, Death, Flavor. There were–have been–many others. Somewhere along the way, I met an impassioned artist named Iviva Olvenick, and soon she became my co-curator of the occasional pop-up art shows we’ve since gotten into the habit of creating.

Below the artist Nicola Ginzel sits with one of her sculptures, and several viewers, at the second show Iviva and I produced together: Totems & Talismans in October 2014. 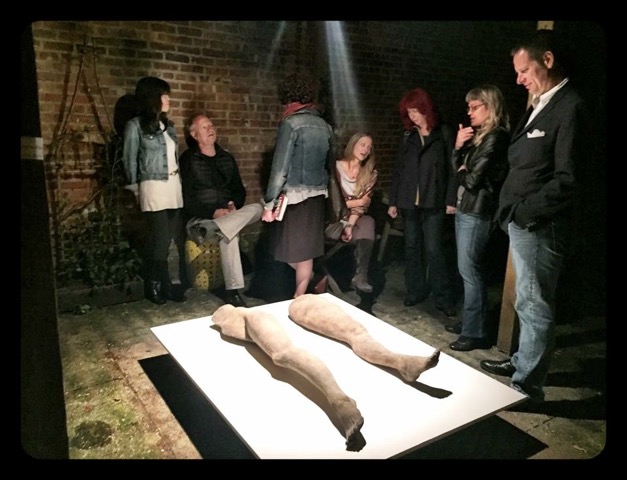