I know that there must be women and men who stay home with their kids and crank out tome after tome or start foundations or make a mint selling quilts on Etsy. I, however, am not much of a multi-tasker. It’s genetic. If you were to call my mother on any given day to make a date, she might say to you, “Thursday doesn’t work. I have to pick up your father’s prescription.” This is where I’m heading, folks. I’ve definitely got plans to write a vampire-themed octalogy, daily essays attacking climate change deniers, and scripts and songs and jingles, and also start making that HILARIOUS web series I’d dreamed up one night in my dreams. I’m also planning to work out until I’m at least four years younger. In the meantime, though, here’s an essay The Mid published, about keggers.

I was thinking about going to a kegger. I was walking through the center of campus at around four o’clock on a warm Saturday afternoon in late October, and here and there fraternity brothers were commemorating the end of Spring Fling weekend with kegs of beer out in front of their houses. I’ve always liked keg beer. It has a particular taste, as though the beer may have been siphoned into the keg after having been spilled on the floor. 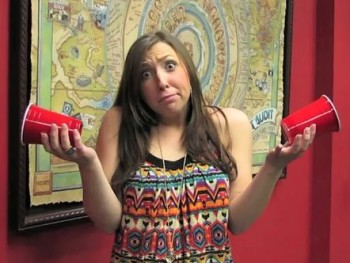 There were pockets of boys milling about, jocks and nerds and party boys. Good-looking boys in button downs and better-looking ones in grungy tees and open flannel shirts, which are my type. So, yes, I was thinking about stopping off for a cold one, and whatever may follow.

There was one small hurdle to leap, though. And that was the fact that I could, arguably, be one of these boys’ mother. I’m not. But it wouldn’t be impossible. Well, actually, it would be impossible, considering I was still a virgin when most of these boys were conceived. I was a late bloomer. Still, I am technically old enough to have spawned one. Sometime later, when I discussed this with a friend, she, too, got hung up right at the moment she was able to calculate what I’ll call the “mother-son differential.” And we wondered, briefly, why men are not turned off by the same biological supposition. Perhaps it is because men do not actually give birth to those girls in the bar who are the ages of their daughters (more on this soon), but we women, well, those boys we’ve been eying could have come right out of the same place that we are thinking of letting them go back into. You can see why it might give us pause.

Which, strangely, was not quite the thing that stopped me. Because the truth is, at that moment, I didn’t feel like anyone’s mother. I did, however, feel like I wanted to have a beer with a good-looking boy. (I am, in fact, the mother of two, but just for argument’s sake, let’s pretend I’m not, or that I’ve shipped them off to live on a farm because they are too rambunctious.) But here was the deal breaker: I was not one hundred percent sure I could pull it off. I don’t exactly look nineteen. I’m not going to reveal my actual age  because I have not given up on the idea of returning to campus for a future Homecoming. Suffice it to say that I have eye crinkles, dark circles which despite cover up still look dark, and the beginnings of brow furrows. The skin under my chin is not quite what it used to be. On the other hand, I was dressed right—jeans, groovy untucked shirt, leather jacket, backpack. I have no gray hair  thanks to Clairol, and my family is known (amongst ourselves, at least) for looking much younger than we are.  Was it a toss up? I like to think so.

For the record, I was not on campus just slumming. I was there to be on a panel about non-fiction writing. But I was early, so I went for a walk. So sue me. 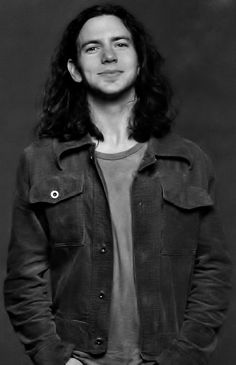 It occurs to me now that maybe I should rethink my free pass. My current free pass is for Eddie Vedder. Or maybe Clive Owen. I go back and forth. If Eddie Vedder or Clive Owen were to ask me back to his hotel room, I may, as per a previous agreement with my spouse, go, and my marriage would be none the worse for it. In fact, it may thrive. Who wouldn’t want to have sex with someone who had sex with Eddie Vedder or James McAvoy? But now I think that perhaps my free pass should be a fraternity boy in a flannel shirt at 5:30 p.m. on Homecoming, on the unmade futon in his room with Warren Zevon on the stereo and a sweat band on the doorknob warning his roommate to keep out. Or something. I’m just riffing here. When you think about it, this seems infinitely more reasonable than a celebrity free pass. I mean, what are the chances there? But there are colleges everywhere.

Anyway, where was I? Oh, yes, I was standing there on fraternity row and I had an epiphany. I understood something that I don’t think I quite understood before. I understood why some of you men out there pursue ridiculously younger women (or men. Whatever). It is not that these girls make you feel young. You already do feel young. In fact, you don’t think you’re old. You’ve been pursuing women/men since you were, what? Thirteen? You’ve wanted to get laid for practically your entire life. Those feelings are deeply ingrained. You don’t suddenly get a grown up version of them when you turn forty-five. Other things, like taking your kids to the park, or mastering the universe in a suit, those things have no sense memory, because you have only done those things as an adult.

Or, to put it another way, when you spot that young twenty-something in a bar, you don’t say to yourself, “I know, I’m forty-five and she’s half my age. Aargh.” or even, “Gee, I look so old. I hope she’s really drunk.” Instead you say, “I want her.” You look at this girl and you are right back in high school, experiencing the same blinding desire, the exhilarating hope, and the stomach-churning impossibility of it all, since back then you were probably awkward and/or pimply. Here’s the catch, though: this time it might just happen, because now you have the confidence that comes with age and success and a trainer. Your libido is still sixteen, but your ego might just be a cool forty-something.

Or, finally, to put it one more way: you are exactly as old as you think you are when you are not thinking about it. 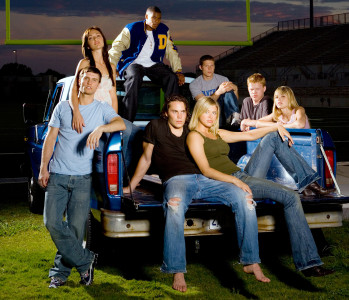 The Friday Night Lights cast you wish was your squad in high school
Source: www.usmagazine.com

When we are confronted by something that looks like our youth, most of us experience a combination of nostalgia and hope; we remember the terrible, beautiful ache of our youthful desires and we want, however ridiculously, to relive them, or no, that’s not it, this is: We want to relieve them. Finally. One of my great secret pleasures these days is riding around my home town with my husband, pretending he’s the high school boyfriend I never had. Another is watching reruns of My So-Called Life or Netflixing Friday Night Lights. These shows’ depiction of the agony of teenage desire is dead on. Their depiction of the agony of adult desire might be dead on, too, but I’m too busy relating to the teenagers to notice.

Look, none of this theorizing means that I am jonesing for an affair with the goalie of my alma mater’s lacrosse team. It is just something that occurred to me, one day, when I was thinking about crashing a kegger.