My father was a compulsive photographer. When he died we hired a digital conversion company to come by with a jumbo mini-van to take a wall of slide carousels, a dozen+ family photo albums dating back to the early 1900s, dozens of home movies and 70+ years of prints to convert into a hard drive for each of us. Apparently, 150K+ images–so far–and there’s more…! While doing some spot checks, we are finding hilarious snaps and images we may need crowd-sourcing help to understand…

So here’s a retro + random post…first, the retro: 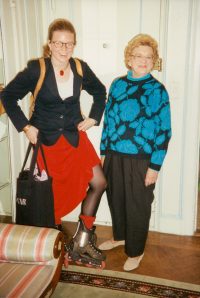 This is me dressed to commute to Mirabella Magazine where I worked 1991-1994. Because I was making $18,500 a year and I was trying to fit in exercise into my crazy schedule (where I was scared to drink water all day because I never had time to go to the bathroom), I am wearing my rollerblades that immediately fell in love with when they came out my last year of college in 1990. I had loved figure skating as a kid and buying them was so liberating–the whole asphalt world became my rink! My Dad was always a self-improvement-fitness-fad early adopter–and gave me that itch for what we call biohacking today (and remains a personal obsession). Please note that I decorated mine with elaborate gold paint-pen (also a relatively new invention) curlicues that were inspired by my love for the Klimt paintings I saw in the Vienna 1900 MoMA exhibit that blew my mind and a subsequent family trip to see more Klimt masterworks at the Secessionist Museum in Vienna (Wein, Austria).

In another retro fashion forward/ fashion fail? note: I’m wearing a long red skirt made out of ribbed leotard-like early lycra fabric that I loved and found easy to move in and was tantamount to proto-“athleisure” wear–think I bought at a SoHo open-parking lot stall–back when there were empty non-developed spaces in that neighborhood and before the haute couture had elbowed everyone else out. Yes, everyone wore pantyhose to work in the summer then too, but I would buy my tights at Danskin because they were sturdy enough to go into the washing machine and I was too lazy to handwash.

Last-century fashionistas may be amused to see I’m carrying a Harpers Bazaar black totebag from some promotional event circa that era’s splashy relaunch under the late great Liz Tilberis.

In the firm fashion fail confession category: I’m going to pre-empt any haters and just say I’m very alarmed to notice I’m wearing a scarlet “iron cross.” It’s all coming back to me as a stocking stuffer gift my mom got for me, a hand-blown glass pendant that she had found at an artisan glass store we both loved on the corner of Madison and 90th. Every year she and I would seek out new handblown ornaments like glass candy canes and twisted glass icicles and impossible marbled glass orbs. My compulsive collecting mother had thought it would be fun to start seeding my own cross pendant collection. She had been adding to her own for decades and thought would be a fun mother-daughter tradition to pass along to me as she thought of herself as an artsy Catholic (an oxymoronic term?!). Now my mom was a PhD art historian and has treasure hunted artifacts from her world travels (she did her thesis on portable buddhist shrines) and I know she knew the symbol went back centuries prior to the 3rd Reich (just like the swastika was a Hindu symbol thousands of years before it was appropriated by Hitler’s branding machine). And OF COURSE my mother never meant the gift to have anything other than what she saw as a bold and festive holiday scarlet bit of bling. So before I get flamed by anyone, I can assure you, I would never wear either now as I would never dare to be mistaken any kind of association with the domestic terrorist alt-right neo-Nazi groups. [[For the curious: https://en.wikipedia.org/wiki/Iron_Cross]] Insensitively clueless though the fashion world was then, wish I could say it had come farther by now.

Now, here’s the random mystery part: NO idea who this woman is–anyone recognize her? According to a roll of photos, my parents hosted her for days–they had pictures of her at many NYC tourist attractions like a Broadway show and Orso restaurant–I think that she was some long lost family friend or relative staying with them…?