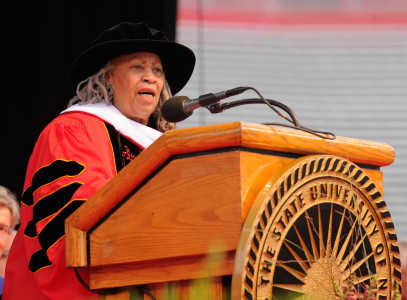 
In her speech at Rutgers’ 2011 Commencement, Toni Morrison argued that the pursuit of happiness, although fulfilling to a point, leads only to a trivial life. She argued that pursing happiness is “looking good, instead of doing good” and recommends pursuing meaningfulness as far more worthwhile.

While I agree with her, I would also argue that the pursuit of meaningfulness is more than a quest for social justice—it’s a pursuit of commencement. The word “commencement,” after all, implies beginning. To me, it implies an engaged mode of travel, rather than simply a solitary moment spent on a sunny football field listening to people define words like “commencement” and “adulthood” for you. It implies perpetually changing, perpetually making sense of the world and how you fit into it, as well as how others fit into it. And it implies action and agency, both to change the world and to change yourself according to the limits of that world around you.

During my second year of college, I began working in the office of NYU’s Department of Social and Cultural Analysis. The department is home to a variety of majors—everything from Africana Studies to Metropolitan Studies—all of which focus on challenging the beliefs and ideologies that we have grown up believing are self-evident.

While doing data entry on the department site, an intro course on gender and sexuality studies, sounded interesting and taking it turned into a commencement for me. It gave me the insights and language to understand that there are many forms negativity that inform our unconscious beliefs, from the status-quo cultural ideologies that we are immersed in from birth, and the ways in which our unconscious minds perpetuate those ideologies. These kinds of ideologies often cause women, for instance, to default to passivity in most situations, or for most of us to assume that everyone around them, so long as they dress according to gender conventions are heterosexual. The course kicked off a never-ending chain of awareness-induced commencements, turning every day into one of new beginnings as I double-check my pronoun usage in conversation when referring to drag queens and transgender characters in Paris is Burning or as I notice my assumption that an exterminator is automatically male. Suddenly I can’t walk to work without considering the ideologies that has caused skyscrapers to look so phallic or questioning why words like “phallic” and “feminine” even have to exist.

The course underscored for me just what Toni Morrison recommended—meaningfulness. But it also gave me the courage to pursue commencement and meaningfulness in my own perception of myself. I can now safely say that labels are a necessity—how else, after all, are we going to communicate our identities to others?—but I can also safely say that the course has taught me that it’s all right to feel uncomfortable labeling some aspects of myself. The course has taught me to embrace, for instance, the ambiguities of my own sexuality, so that I, a female-identified individual, can date my female-identified partner without feeling any obligation pigeonhole myself into a label such as “lesbian” or “bisexual.”

But it’s also allowed me to see that the meaningfulness Morrison asks us to pursue, in terms of personal identity leaves room for some ambiguity, so that terms like “mostly gay” are just as valid in terms of defining my own identity as are more readily definable terms like “female” and “American.” It has evoked a personal commencement that gives me the freedom to embrace even an identity label as delightfully (and frustratingly) ambiguous as “whatever.”