I started writing comedy a few years after drama school, partly because I couldn’t help myself, and partly to give myself something to perform when I wasn’t working. I’d always written humor of one sort or another and am able to trace it back to some pretty weird stuff I wrote in high school and college. But I was never a joke teller. There was always a story to tell, and the story was pretty much always about me. Or what I think. Or what I think about me.

The Few, The Proud 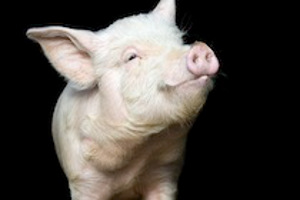 What’s the story with those French truffle pigs?  If they like truffles so much how come they don’t just eat them?  What’s stopping them?  What’s stopping them from just saying to those French truffle farmers:  buzz off, monsieur, I saw it first, and then snarfing it down?  I’ll tell you what’s stopping them.  Muzzles and leashes and waps on the snout with a knobby walking stick.  That’s what’s stopping them.  Jesus, how would you like it to be your portion in life to constantly be searching for the yummiest thing you can think of, the thing you want the most, and then every time you find it someone schleps you back with a jerk, snapping your head probably and wapping you on the nose for good measure, just to teach you a lesson, and then, takes it for themselves.  Just takes that yummy thing.  Just takes your happiness.  And in the bargain, in the bargain, serves you slop for dinner.  If you were smart, you truffle pigs, you would suck those truffles right up and then act cool, like that one wasn’t a truffle at all, whoops, you made a mistake, that was just a regular little brown mushroom, not a truffle, no, definitely not a truffle, yech.  But you’re not smart, you’re just a fat stupid pig and the only thing standing between you as you are now and you as a Jimmy Dean Pork Sausage is your keen sense of smell.  And people pat you on the back or scratch you between the ears and tell you what a good little pig you are, you’re so talented, so special.  And you let yourself believe it, for just one moment, one golden shining moment.  I’m special, I’m talented, I have an Extraordinary Sense of Smell.  And that’s how it starts.  You get sucked into the vortex.  No, no, you go willingly, you weak, easily manipulated piece of shit.  Hi, I have only one discernable talent, no ambition, and no self-esteem.  May I please go into the vortex?  But don’t feel badly, because it’s not really your fault.  You have to live for God’s sake, you have to eat and sleep and work just like everyone else.  So you compromise, you give a little, and you give a little more and a little more until you’re just a pathetic tool, a loser, an undignified, spineless…pig. 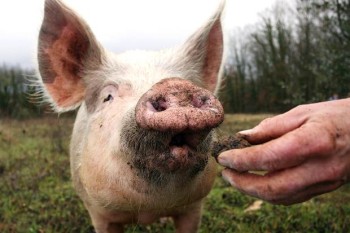 And you dream of freedom. You dream of the day when you will run muzzleless, leashle, leashsh, without a leash, through the truffled woods of your youth, full of promise, full of hope. You dream of release, of deliverance, from your hell, from your prison, yes, the one you built, from your own personal Church of Scientology. But is there any way out? Is there? You ask the other pigs. But what do they know? They’re just pigs. Oh, God, let me out! Let me have my happiness. Let me eat my truffles! Let me eat my fucking truffles! Or not. Not if I don’t feel like it. Maybe I’m in the mood for a truffle. Maybe I’m not. It’s my choice. I have a free will. This is America, Goddamn it. Oh, wait, no, shit, it’s France.

But eventually you make your peace. Nobody has a perfect life, you say. Nobody gets everything. You have your health, for God’s sake. Things could be worse. Much worse. Some pigs have never experienced the remarkable, earthy intensity of the truffle. Some pigs have never been delirious with the heady fragrance, or dizzy with the thrill of the find. I found it, I found it! Some pigs wouldn’t know a truffle from a stale Devil Dog—which, as you would know, because you are a truffle pig, smell almost exactly alike. 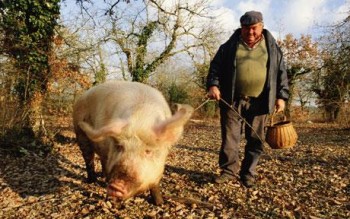 And you’ll tell your children, and your children’s children that yes, you were part of that elite society. You were one of the few, the proud. You, a truffle pig. How many can claim that distinction? And finally, at the end of the day, after the reminiscences and the songs, after the anecdotes,  after all, you will have convinced yourself, as well. You will have convinced yourself that you did your best, that these were the chips you were dealt, this was the life you were destined to live. Because to think otherwise, to think otherwise, my friends, would be unbearable.