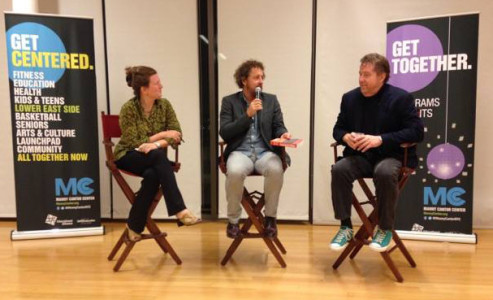 On Wednesday evening (10/15/14), Food Network fans, Ina Garten wannabes and media junkies gathered at the Manny Cantor Center on the Lower East Side to see Ideasmyth client Allen Salkin, author of From Scratch: The Uncensored History of the Food Network, in conversation with David Rosengarten, one of Food Network’s first culinary stars. Ideasmyth’s Creatrix-in-Chief Victoria Rowan had the honor of moderating.

From Scratch, as described on Salkin’s website is “a behind-the-scenes look at the history and the personalities that have made The Food Network what is is today”–which basically means that Salkin got to live the foodie dream and have a chat with over 200 of food media’s brightest stars about–you guessed it–the food industry. The book gives you the inside scoop on what The Food Network was like from behind-the-scenes in both its early days and its time as a food industry powerhouse. Combine Salkin’s delectable brand of investigative journalism with Rosengarten’s refined foodie connoisseurship–fairly evident in the heavy emphasis on wine and holding tasteful parties in the many books he has published and/or contributed to–and you have a recipe for  deliciousness.

If I hadn’t known they were a journalist and his subject, I would have guessed they were college buddies. They joshed around and gabbed about juicy stories from the good ol’ days as if they were unaware of an audience watching from the other side of a two-way mirror. Except their good ol’ days involved names with serious celeb foodie bold-face types, like Julia Child and Bobby Flay. As Salkin described it, the Food Network world is like a “weird high school where everyone is famous.” 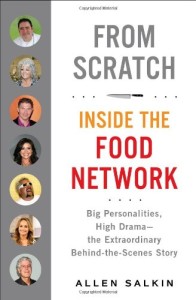 FROM SCRATCH by Allen Salkin


Rosengarten talked about his first solo cooking show, “Taste,” and how the network has since “hit the foodie ceiling” and moved into producing more reality competition-based shows (as any loyal “Cupcake Wars” or “Chopped” fan would know). Speaking to the helter-skelter low-budget-ness of FN early days, Rosengarten revealed his discovery of the tape archive in New Jersey where all of his old “Taste” episodes and other defunct Food Network shows are kept—a celebrity chef time-capsule graveyard. He also discussed his recent revival of his old James Beard award winning newsletter, The Rosengarten Report. The newsletter originally ran from 2001 to 2007, and will be making its re-debut this December.

At one meta-moment, Salkin dared to ask Rosengarten what he honestly thought of his portrayal in From Scratch. What followed could have killed the convivial atmosphere of the evening, but Rowan refereed and Rosengarten shrugged it off saying, “Look, it’s really annoying to read about yourself.” He went on to admit that while he had not read the whole book and felt that his personality had been mischaracterized for storytelling effect, he was overall appreciative of what Salkin did in From Scratch in terms of capturing The Food Network’s history for posterity.

As a Food Network enthusiast myself, the night had its entertaining insider moments—who knew Robert Irvine has a small ass?! Or that Rosengarten could whip out a killer Julia Child impression involving the words “home dairy” (a story in the book). That alone was enough to make the evening worthwhile—and enjoying excellent Kosher cognac from Louis Royer, beer from Malt and Mold, and kosher pizza all from the roof deck of the Manny Cantor Center made it all the more wickedly delicious.

Allen Salkin’s book tour is a transcontinental unpredictable multi-venue magical mystery tour–that has more dates and locations than a big-hair band. To catch him in your town, check out his schedule here.

~~~Alex Ritter graduated from NYU in May and is directing marketing and advertising strategies for a domestic staffing startup. She is hoping you will see her name soon enough in your local bookstore on a collection of short stories.