I’m looking at the world’s 44th richest man seated directly across from me at the conference table, who’s looking back at me over the tops of his half-moon glasses—or half-looking at me, the other half looking at my work samples in an open manila folder that sits atop a stack of manila folders containing samples from other writers. “I’m considering a lot of candidates,” he says, “as you can see.” Which of course I can see, and which I will come to see is not more dreary proof that PowerPoint-ese (the tendency of a public speaker to read the words on the slide behind him as though his audience is illiterate or blind) has corrupted all corporate thought down to even job interviews – but as an example of “granularity”—language wielded with such precision that there can be no confusion or debate as to its meaning. “Why should I hire you?” 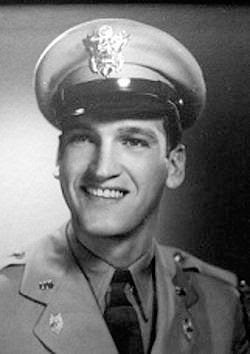 The handsome devil himself

This comes as a mild shock. As a rule, the people I meet aren’t candid about whether or not they want anything to do with me—nor am I with them. We tend to speak with our actions, not with our words. For example, we stop returning each other’s calls, rather than asking, “Why should we continue this relationship?” This is perhaps a self-selecting group: I grew up in a family where we might spend Christmas together, then return to our respective homes to find waiting in our mailboxes a notice informing us that one of us has filed a lawsuit against the other. (“Happy New Year!”) That is one reason why the cloak-and-dagger intrigue of Shakespeare’s tragedies and (as my clan is Texan) the plot lines of Dallas always struck me as comfortingly familiar.

On the other hand, my father (pictured above) was a decorated bomber pilot, and after that—because of that—Eisenhower’s personal pilot, and underneath all that—the fundamental behavioral state that allows you to bomb Korean villages from 50 feet and earn Silver Stars and then a job flying the future president of the United States—nuts, and absolutely fearless when it came to speaking his mind. Yes, my mom divorced him, but even a few alternate weekends of exposure to that kind of homicidal intensity steels you against fearing virtually any personality you will ever encounter – even the world’s 44th richest man.

So when 44 asks me, “Why should I hire you?” The initial shock and anxiety and self-doubt resolves into a picture of my father I can see vividly in the core of my personality. I say, “Because people with your kind of wealth and power don’t often get to hear the truth. And the main truth you need to hear is whether or not you’re boring. Because if you’re boring, the strength of your ideas won’t matter. No one will care.”

44 says, “That’s good.” Which is a great feeling—and a humbling feeling. I know I’m going to get the job—and that it has something to do with my skills as a worker—but perhaps even more to do with my skills as a person—and therefore, with my father. For a moment, I’m actually grateful for my childhood.
~~~James Braly is the writer and performer of the monologue Life in a Marital Institution, which premiered at the Edinburgh Festival Fringe, sold-out 59E59 Theaters in New York City, and transferred Off Broadway to the Soho Playhouse. Reviewed as “gaspingly funny” (Variety), “never less than excellent” (The New York Times), and “a masterpiece of storytelling” (The List), the show has played over 120 performances and is currently on tour around the country. Learn more about James at www.jamesbraly.com