Service was in my stars.

The look was important.  So was what I needed to do. I needed to draw and paint. Read and write. Act and dance. Sweep and move furniture. Not wanted. Needed!

“You’re not going to art school,” my parents said. “Too many weirdos!” They painted and drew, consulted horoscopes, nightclubbed, had a quote from King Lear ready for any infraction on my part and took me to see Mean Streets and Faces. At the catholic prep school in Manhattan they sent me to, the nuns there took us to see Peter Brook’s A Midsummer Night’s Dream and almost everyone in it was nude. On swings.

But this was from another time, a time where you never saw a grown man on the street from the hours of nine to five. Mothers and children owned the streets between those hours. School, shops, playing, preparing.

In Riverdale, a Manhattan outpost, at 2pm mothers gathered in one or the other’s apartments and performed a cake ceremony. On my mother’s day, the scent of My Sin perfume, cigarette smoke and coffee in our dining room could gag a bishop. Cake was cut. Cake was consumed. Cake would come again. The best cake was crumb cake.

Then, somehow, decades later, adrift on that mysterious boat that sometimes brings you to the land where you need to be, I disembarked at The Writers Room. There in my job I am all the things that I was destined to be by my stars and wanted to be by my constitution.  And I brought cake with me. 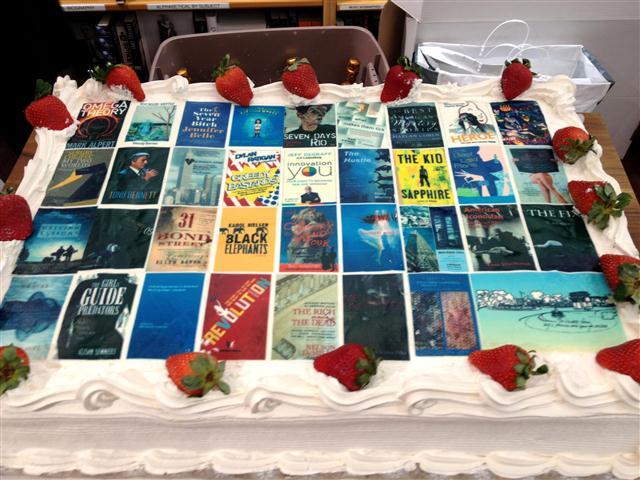 A strawberry shortcake from Venerio’s with replicas in sugar of books published by Writers Room members.

~~~Native New Yorker Donna Brodie has been the executive director of The Writers Room since 1994. She introduced Writers Room members to her cult of cake when she devised and hosted the first Writers Room collective book party in 1995. Donna is writing her first novel, Donna in Love after Swann in Love. On the role of baked goods in the novel, she says, “Proust had his madeliene. I have my mallomar.”