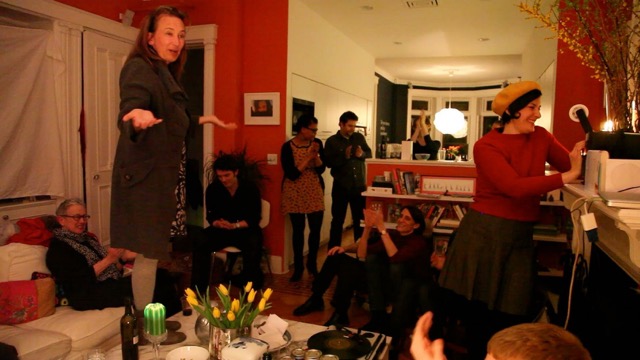 What have I learned on the journey of discovery that’s been The Brooklyn Cottage?

Start with what you have.

Make your life a celebration.

Don’t waste time trying to be anyone other than who you already are.

And what for its future? As recently as last month, with both my daughters newly out of the house, I thought perhaps it was time to close up the Brooklyn Cottage shop–that maybe this particular experiment had come to the end. It’s never been the the least bit profitable, this thing I’ve come to love so much, which means neither I nor Yazmany Alboleda, the Brooklyn Cottage’s tireless design director, who created a magnificent website for us and crafts all the design collateral for each of our events, has ever received a dime for it.

When I shared this new idea with Yazmany a few weeks ago over breakfast at Milk Bar, our favorite Prospect Heights haunt, I figured he might be relieved.
“Absolutely not,” he said instead. “The Brooklyn Cottage must continue.”
So for now, anyway, it shall. On September 30th, we convened “Writers of a Certain Age: Poetry, Stories & Essays by People 65 and Over,” and twelve very diverse readers mesmerized a group of thirty scattered around the cottage living room.
On October 28th, Kent Shall, will lead an intimate conversation among men who are strangers to one another called “Himself.”
On November 12th, Amy Tingle and Maya Stein will bring their vintage typewriters to the Brooklyn Cottage and create on-the-spot custom poems for every participant as part of “Poetry on the Go.”
And on December 2nd, Nicole Skibola and Colleen Doyle will preside over “Darkness and Revelation: an Intimate Exploration of Grief,” in which Nicole will introduce an illustrated memoir she created in response to her own devastating cancer diagnosis as a young woman–and use is as a launching pad for a collective exploration of new tools, services and rituals we might design to support grief.

The Brooklyn Cottage now has an outpost in the Catskills, available to artists and writers, would-be and otherwise in need of time to reflect and create.

Beyond all this, I like what the late journalist Eduardo Galeano had to say when people asked him “what’s next”:

“I don’t know. It doesn’t matter.  What matters is now. It’s the same as moments when I fall in love. Moments of love are infinite while they last.”