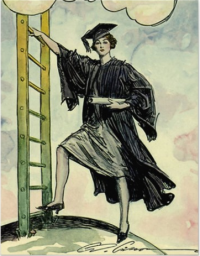 I felt like I was six-years-old again. Like I had raided my mother’s linen cupboard with my older brother. We would drape our pillaged bedding over our shoulders, holding the sheets in place with a knot tied at the neck. Our capes always looked preposterous, but we felt too grand to care. I never imagined graduation would feel so much the same. Standing in front of the mirror in my cap and gown, I could almost hear my big brother laughing. Indeed, the longer I stared at my reflection, the harder it was to take myself seriously, to maintain my dignity. I removed my mortarboard from my head, wondering if it was too late to change my mind. But few excuses seemed fit for calling in sick to graduation. The hat made me look funny, I imagined explaining to my Dad, I couldn’t possibly proceed. Instead, I put my mortarboard back on and attempted a coy smile at my reflection. But that only made things worse. I threw the heavy mortarboard on the pile of failed outfits strewn across my bed, in unreasonable exasperation. Nobody ever tells you how ridiculous you look when you graduate. It’s like getting married in the eighties, only worse. Somewhere in history someone must have been to blame. I hitched the hem of my graduation-bedding sheet and headed to the door, vowing to find my explanation.

Turns out, in the advent of universities, masters and scholars were generally clerks or members of the clergy. Consequently, the beginnings of academic dress resulted from greater conservatism in the universities than in society as a whole. Despite everyday dress changing dramatically over time, the academic clergy refused to give in to Vogue magazine, stubbornly retaining their more formal, old school trends. Instead, requirements for academic dress were firmly set in place, rigid guidelines that have persisted over time. The mortarboard shares a similar journey, with its original found in lay fashion. At the Synod of Bergamo, Italy, in 1311 clergy wore a pileus, a simple hat that inspired the outré mortarboard. Centuries later, young graduates are still wearing awkward, clunky hats to their academic inauguration. But regardless of its bizarre pretense, and its defunct religious roots, the legendary cap and gown is an important ensemble, and one that says a lot. Check me out, your bellowing sleeves tell the world; I’m an educated individual, with large and meaningful thoughts. You might not look sexy when you graduate, but you definitely turn heads.

And turn heads you should. The right to wear academic dress is one that takes years to earn. Not unlike an astronaut, the graduate must invest much time and effort before qualifying to dress with such pedagogic panache. But, perhaps most importantly of all, academic dress inexorably symbolizes a moment in time unmatched by any other, a rite of passage that is arguably as important as figuring out how to tie your shoelaces, or buttoning up your shirt. Wearing your cap and gown you become, whether you like it or not, an individual who has (seemingly by default) acquired a new and renewed purpose in life. Armed with the proper education, they are now free to embark on a new journey in their profession of choice. Promptly the graduate falls—some with joy, others with terror—into a new and lengthy chapter, written in a language they cannot understand. To the observer, the cap and gown indicates a sound conclusion, an impressive academic feat. But to the graduate, it is a liberation into a world unknown.

Notwithstanding its aesthetic absurdity, the responsibility that comes with wearing the cap and gown should not be taken lightly. After all, on a logistical level alone, navigating the world in a cape of such magnitude isn’t easy, (never mind the added burden of looming societal expectations and civic responsibility). Your oversized sleeves get caught on doorknobs; your hem falls right at trip height, and your teetering mortarboard injures anyone daring enough to give you a loving embrace. The graduate is thus a regal and educated creature; incapable of climbing stairs, and safest left untouched. Only once bathed in the bright lights of the graduation stage, did I bask in the vast importance of what I’d thought was merely a charade. Though my Dad was too small to distinguish in the crowd, I knew that he’d be watching, and I knew that he’d be proud. And so I took a small curtsy, and I accepted my degree, at once oblivious to the dismay I’d felt towards my heavy, academic dress.

After all, there is a specific kind of joy that comes from collecting your cap and gown. Not unlike the joy felt when you were six-years-old, pillaging your mother’s linen closet, trying her nice bedding on for size. There is a feeling that comes over you, a certain pride you can’t explain; the satisfaction is insurmountable. Draping your heavy, black gown over your shoulders, you become a person changed. It’s what one might call a moment. No other garment feels quite the same. You might look preposterous, but you (eventually) feel too grand to care.

~~~Kathryn Carter is a recent college graduate from Australia who writes about fashion.

Posted in Graduating and tagged College, graduation, may.