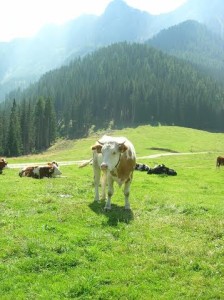 A friend took me hiking in the Dolomite mountains. At first we chatted, our conversation like bubbles in a soda glass, fast and furious. Did I mention that my friend hikes all the time? Did I mention that I go on long walks? You know, the regular midtown to downtown, west side to the east side sorta walk. Not quite the same as walking straight up the side of a mountain. It was green, it was beautiful, it was hard. One step at a time, I kept taking one step at a time. That’s how we graduate. That’s how we grow. That’s how we get there. And on the top of the mountain, there were cows! There was also much needed water, a delicious lunch and cold refreshing white wine. (All of which made the climb oh so worth it.)