Some knots help–keeping your shoes on, tethering the dingy to the dock. Some are downright delicious, like garlic knots. Then there are the majorly irksome, like hair knots or infernal earpod wires. This June, we’re looking at Gordian knots–and the ingenious work-arounds that free us from those seemingly impossible snarls.

This week in particular, we’re focusing on one of the most impossible and perplexing snarls of all–love. Danielle Trussoni, writing as her alter ego, Dani Tru, shares some excerpts from True Romantic, a weekly column featured in The Rumpus. For the full True Romantic story, visit Dani Tru’s column here. 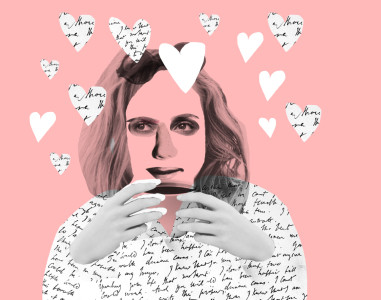 I once met a man whose wife fell off of a cliff.

The man is a poet and ethnographer named Renato, and one night last fall, I went to a poetry reading where he read a poem about his wife’s death. Her name had been Shelley. She’d died almost thirty-five years ago, in 1981, when they were young ethnographers doing fieldwork in the village of Mungayang in the Philippines. One minute, he said, his wife was walking with the others along the edge of a steep cliff. Then, suddenly, the ground underneath her gave way and she was gone.

Renato speculated about why this had happened: Maybe Shelley had stepped too close to the edge, or hadn’t been wearing the right shoes. Maybe she was preoccupied with her work, or had been talking too much and wasn’t paying attention. Maybe it was her fault. Maybe it was a freak accident. Maybe he shouldn’t have allowed her to go. Maybe it was her destiny to die young and the gods themselves had pulled her down those sixty feet to the rocky river bed. He could never know.

See more of Trussoni’s Featured Creative posts on our Ideablog

~~~Danielle Trussoni is the author of four books: Falling Through the Earth (2006), Angelology (2010), Angelopolis (2013) and the forthcoming memoir The Fortress (2016). In addition to being published in The New York Times, The Guardian and Tin House, her writings have been widely anthologized.

Falling Through the Earth, a memoir about her relationship with her father, was chosen by The New York Times as one of the Ten Best Books of 2006. Falling Through the Earth was recipient of the Michener-Copernicus Society of America Award, Elle Magazine’s Reader’s Choice Award for April 2006 and was chosen as a Book Sense Pick for March 2006. Her novels Angelology and Angelopolis were New York Times Bestsellers and have been translated into thirty-two languages. You can learn more about Danielle at www.danielletrussoni.com and follow her on Twitter @DaniTrussoni