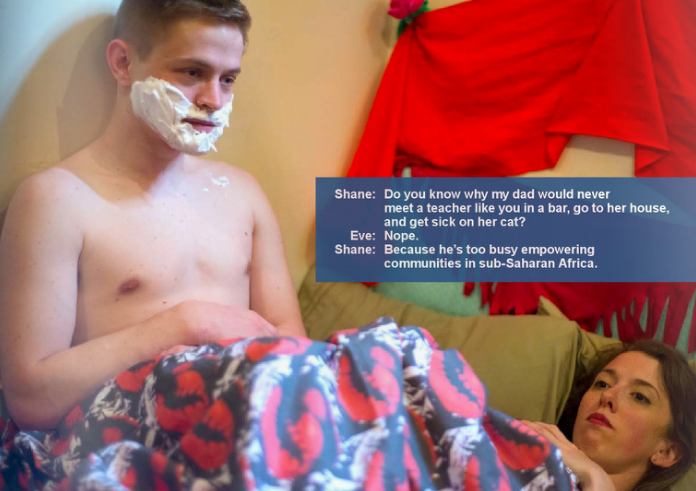 What are your personal career ambitions with this project?

In an ideal world, the magazine would be profitable enough that I could publish it for a living. But let’s look at the facts. Hausfrau has a number of things going for it as a concept — it’s a fast read, it’s funny, and it’s very visual. A lot of people don’t actually read magazines, they just flip through and look at pictures. Hausfrau works for that type of reader, but it also appeals to readers who are looking for a funny story and characters they can relate to and get to know better over successive issues of the magazine.

I would also like to start licensing photo-comics to other publications. Sometimes I toy with the idea of morphing it into a comedy-intensive advertising agency, which happened with The Onion. I think The Pharmacologists — a story about a guy who sells pharmaceutical drugs illegally on the hard streets of New York — would work as a novel, movie, or sit-com.

And, who knows, maybe someone will pick it up, look at the back issues, and think, “This Kosloff guy is kind of talented.” Research to date indicates that Hausfrau is unprecedented in the history of American magazine publishing. You could say that it’s not just a new title, but a new genre of magazine. I’ve read through one gigantic academic history of American satirical magazines, I’ve done a bunch of Googling, and I have yet to find any other example of a magazine that is built around a serialized photo-comic.

Those aspirations aside, I will continue to publish Hausfrau regardless of whether or not it becomes profitable or leads to other opportunities. Putting the magazine together is a really meaningful experience and a total riot. We spend much of the photo shoots laughing our asses off.