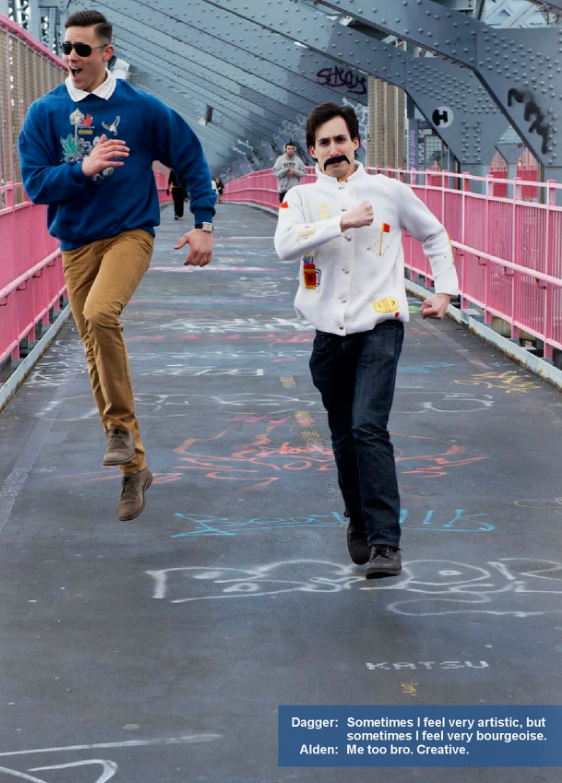 What is the genesis story of Hausfrau magazine—and the name?

It’s a weird and non-linear story. In 2010 I started shooting events for Gawker, with my camera, and for these shots I would attempt to write funny explanatory captions. After a few months of doing this, I thought about doing a photo-comic, and pitched it to Gabriel Snyder, who was the editor of Gawker at that point. I did a shoot at a bar in SoHo called The Room with the performance artist Michael Portnoy and Mike Colter, who starred in “Million Dollar Baby.” I had my friend, Anthony Gallegos, who is in Hausfrau, menace Michael Colter with a raw chicken carcass.

Gabriel took a pass on the idea, at which point I completely forgot about it. It never occurred to me that it could work as a stand-alone print publication.

But then in February of 2013, I was lying in bed on a Saturday morning with a hang-over, and the idea of a magazine that consisted primarily of a humorous, serialized photo-comic popped into my head, and that was basically it. A few days passed before I remembered that I’d pitched a similar concept to Gawker.

As far as the name, the magazine was originally going to be called “Jazzercise,” but I got a very sternly worded cease-and-desist letter from Jazzercise Inc. of Carlsbad, CA. Creeps. So, I was thinking about titles, and was looking for something distinctive and campy. I don’t remember exactly how I landed on “Hausfrau.” I launched a magazine in 2001 called Ghent, so I suppose my brain is hard-wired to launch magazines and then give them obscure Euro-titles. “Hausfrau” is shorter than “Jazzercise,” which is a plus, and since it’s a foreign word there were no trademark conflicts.

I’m glad that Jazzercise didn’t work. Some people thought the magazine was about dancing.

How do you come up with these kooky koncepts?

I love taking pictures, writing, and making people laugh, and out of that — pow — Hausfrau. I also have a quixotic love affair with print magazines, and starting them. This may be a genetic thing; my grandfather Bill Houseman worked in the magazine business for most of his life; Look magazine, Life, and he was the executive editor of House and Garden. He also launched his own magazine called The Environment Monthly.

The weird thing about Hausfrau, though, is that I had no interest whatsoever in starting a magazine when the idea occurred to me. It fell on me like a piano from Heaven.