These days, I am a proud introvert. But it wasn’t until I picked up Susan Cain’s Quiet: The Power of Introverts that I learned to have a positive relationship with my introversion. Cain reframes the personality trait and presents it not as a character flaw, but as a strength–one that presents challenges, yes, but ultimately one to value for its contributions. As someone who often feels drained after sharing the same space with two or three people for longer than thirty minutes, Cain’s work has provided major perspective shifts that have ultimately made me a more self-accepting person. 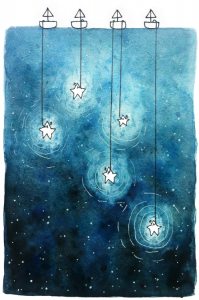 Cain calls out American culture for privileging extroversion and outgoingness, noting: “Introversion–along with its cousins sensitivity, seriousness, and shyness–is now a second-class personality trait, somewhere between a disappointment and a pathology. Introverts living in the Extrovert Ideal are like women in a man’s world, discounted because of a trait that goes to the core of who they are. Extroversion is an enormously appealing personality style, but we’ve turned it into an oppressive standard to which most of us feel we must conform.”

Cain was the first person I encountered who named that “oppressive standard” and, in doing so, provided an explanation for the immense sense of difference I experienced during my adolescence. Growing up, before I’d ever heard the word “introvert,” my quiet disposition felt like a deep, unconquerable character flaw. My report cards, from kindergarten through 12th grade, always said the same thing–“Kim’s a great student, but she’s really quiet”–as if my reserved nature were the only thing holding me back from being that “great student.” All throughout middle school, classmates antagonized me with questions like, “What’s wrong with you?” and “Why don’t you talk?,” prompting me to stop talking in and out of class altogether. When I went away to college and began living in a dorm room that felt busier than Grand Central Station, I experienced my worst reaction to that “oppressive standard” to-date. Cut off from the friends and family I’d grown up with and exhausted by the new social environment, I struggled to build the same community of friends I watched classmates build with comparative ease. I went to NYU’s counseling center and started therapy for what I considered my “stubborn shyness,” convinced that there was something very horribly wrong with me.

Cain also encourages her introverted readers to see the positive qualities that introversion most likely gives them–like a tendency to describe themselves as “creative or intuitive,” and to “notice subtleties that others miss–another person’s shift in mood, say, or a lightbulb burning a touch too brightly.” She proposes that introverts, rather than thinking of themselves as necessarily flawed, find ways to work with their introversion–like the university professor she discusses who, after giving lectures that blow students’ minds, hides out in the bathroom for several minutes to recover his social energy.

When once I desired nothing more than to write a letter to everyone in my life, apologizing for not speaking to them as much as I thought they deserved, Cain’s book made me realize I no longer had to be apologetic. I declared a new life goal (on Facebook, too, because typing a Facebook status is obviously easier than telling people face-to-face): “Never apologize for all of my quiet again.” And I’ve gained the confidence to approach my social battles strategically–I can take improv classes and participate in eight-minute-long scenes in front of an audience of twenty people, so long as I conserve my energy somewhere quiet before and after the class or performance. Now, I can dedicate as much energy to writing as I did during my most solitudinous, pre-driver’s-license high school summer vacations by getting up with the sun and giving myself a roommate-less living room space in which to work. Rather than feeling excruciatingly conflicted, I easily turn down a lunch or dinner offer if I know I have a party, show, club meeting, or other equally exhausting evening activity on the agenda. And I can even post “Read More”-length arguments on Facebook championing the legitimacy and strength of the quiet, introverted, and/or socially anxious–so long as I ban myself from checking my page for the next three or four hours. 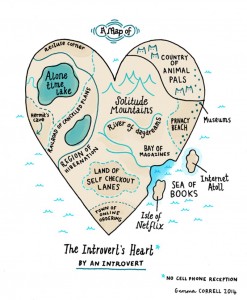 If you need me, I’ll be in the Country of Animal Pals. ©Gemma Correll

The most important effect that Cain’s book has had on me, however, is that it’s made me proud of my introversion and my silence. Recently I got coffee with a friend, and discussed how much I enjoy being the wallflower at parties. When I made the comment, my friend’s brow furrowed. “Oh, Kim,” she sighed as she looked at me with the kind of distraught concern she’d have if I were telling her about a recently deceased pet.

I just looked her right in the eyes and said, “Actually these days I’m happy to call myself quiet and introverted.”

She didn’t comment, but the moment was monumentally important more for what I said than for how she reacted. It was one of the first times I’d claimed aloud that my reserved nature was a source of self-esteem. My desire to conserve and budget energy, after all, is what’s helped me develop the solid-as-steel work ethic that’s allowed me to graduate from college a year early–and spend the last couple of years juggling two part-time jobs. So though I may not be as deft as my extroverted peers at organizing events and facilitating discussions, I’m capable of acting as the tough-cookie center that keeps an event rolling–and of stepping back and taking in the nuances that others miss while they’re busy socializing. And that decision to embrace silence and let go of the “ideal” in the phrase “Extrovert Ideal” has been a new and fulfilling adventure for me.

Want to learn more about Susan Cain? Check out her TED Talk and her website!

~~~Kim Kaletsky is Ideasmyth’s editorial and tech assistant and managing editor of the Ideablog, as well as a senior at NYU studying English and American literature, creative writing and web programming. When she is not busy writing novels and running her lit mag blog, Brouhaha Magazine, she moonlights as a music fanatic and boasts a music collection of more than 12,000 songs–and a mental repertoire that is probably twice as large.