Kicking Ass at Being Vulnerable

Disclaimer: All students featured in this post agreed to let me share their stories; several names have been changed. 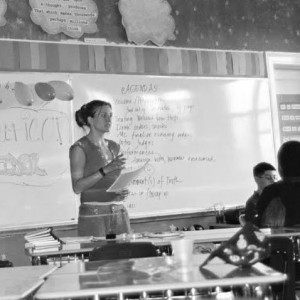 “What does being brave mean to you?” I ask my high school theater students.

It’s fall of 2003, my third week of teaching. We’ve been working on monologues.

Things have not been going well. The first two weeks I couldn’t even get a volunteer to stand up and read a single line of text out loud. Improvisation exercises have helped loosen the kids up a little, but now that they’ve got scripts in their hands again, their acting is mechanical and wooden. Kids who swagger through the hallways dripping charisma stiffen up and go dead once they get up in front of each other in class.

I’ve been offering steady encouragement, but the kids aren’t fooled. “Miss, don’t sugarcoat it,” a girl named Nina says. “We pretty much suck at this.”

Hands go up. I call on a ninth grade boy named Brian.

“Being brave means kicking ass,” he says. The class breaks into laughter and a kid in the back named Jay leans his body diagonally across the aisle to offer Brian a fist bump.

If this were one of my English classes with my glowering supervisor about to step in at any minute with his clipboard, I’d take issue with the swearing. In those classes, where the kids are forced to grind through endless test-prep worksheets and my newbie classroom management skills are no match for their boredom, I’ve been having so many discipline issues that my supervisor has been threatening to fire me if I can’t figure out how to maintain order.

But the stakes are different here. We’re out in one of the “modulars”—a group of makeshift classrooms housed in trailers parked behind the school. No one supervises artistic classes. As long as the kids are engaged and respectful, I can tolerate some salty language.

“Yeah,” says Jay. “Bravery is like, if someone steps to you, you come back at them twice as hard.”

Around the classroom, heads nod and people say, “Word,” and “Truth.”

A tall skinny girl named Taya raises her hand. “Bravery is about not letting people see how you really feel. Like,” she pauses, twisting in her chair and arching her eyebrows pointedly at the girl in the row behind her, “not being a whiny little bitch.” 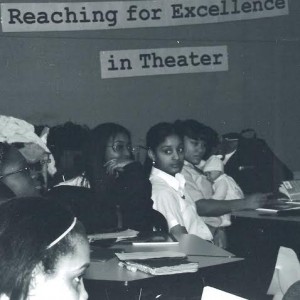 I’m about to take issue with Taya’s tone when across the room a girl named Mia slaps her desk with an open palm and stands up. Her smile is wide open and her body is loose and playful.

“Being brave means you man up! I don’t care if you’re a girl or a guy. You MAN UP.” She pounds her chest. This is a performance now, and she’s into it.

“You get tough!” she yells, her broad smile morphing into an exaggerated scowl.

“YEAH!” the kids holler in response.

“No chicken shit! No crying. No bullshit. You feel me?”

The kids are out of their seats now, high-fiving each other, high-fiving me. And I purposefully let myself get swept up in the game of it, mirroring Mia as if this were one of our warm-up exercises where we get synched up as performers by echoing each other’s phrases and gestures.

What dawns on me as we’re all slapping each other’s hands, beating our chests and mock snarling at each other is that under the pseudo-aggressive stance, Mia’s words are pretty much verbatim the same advice my supervisor gives me every time he calls me for a check-in session. My biggest problem with those English classes, he says, is that I’m not being tough enough. I’m not going hard enough, so the kids don’t respect me. “If a kid challenges you,” he says, “you come back at him twice as hard. You’ve got to show him who’s boss. That’s the only kind of leadership these kids respond to. If you don’t, you’ll never get compliance.”

I instinctively bristle at the phrase “these kids” and the term “compliance.” But who am I to argue? My supervisor is an African American man in his 70’s. He was born and raised in this neighborhood. I’m a white girl in my early twenties and grew up in the Connecticut suburbs. He has fifty years of teaching experience in urban schools; I’ve got a scant year of Ivy League coursework under my belt. Maybe I’m overcompensating for my fear of what manning-up in the classroom looks like when my white privilege comes into the equation. Maybe I just don’t have the skills or the confidence to “go hard.” Maybe, somewhere deep under the surface, there is some scared little spark in me trying to light the way to a vision that I don’t have words for yet, let alone the capacity to start building. But whatever the reason, it’s clear that I am spectacularly lacking in bravery in those English classes, which are the only ones that count. And that means my job is at stake.

For the moment, though, out here in the no-man’s-land of theater class in the modulars, there’s room to breathe—and maybe, I think, some space for me to get brave on my own terms.

With my supervisor’s words ringing in my ears, I let the energy of the classroom begin to wind down. The shouting dials back to a murmur of overlapping voices, and then gradually the room settles into silence.

“I get it,” I say as one by one the kids find their seats. “Strength is about overpowering each other and bravery is about defending ourselves from seeming weak. That’s what we’re all taught, right?”

“And it’s not hard to see why,” I say. “Sometimes, it can literally be a life or death thing.”

No one says anything, but the way the kids are making sideways eye contact with each other, my guess is they’re thinking about this kid Elliot who got jumped in Claremont Park on his way to school two days earlier.

The quiet is intense. For the first time in my entire teaching career, every kid in the classroom is actually listening to me.

“But here’s the weird thing,” I say. “In here, it’s the opposite. Kicking ass at acting means being vulnerable. It means being open. It means letting yourself be fully seen.”