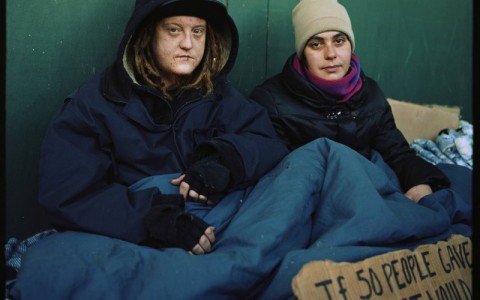 
The hallway leading from the entrance of the West Fourth Street subway station to its ACE platform is always lined with gigantic floor-to-ceiling ads. I was startled recently when they were replaced by a portrait series by photographer Andres Serrano featuring Manhattan’s homeless residents—and I recognized two of the individuals pictured.

One of the women I’d seen, muttering, swathed in blankets, hat and heavy grey coat, and smoking a cigarette or savoring coffee, nearly every time I was on or around Eighth Street. During my freshman year at NYU, I’d even come to think of her—rather unkindly, as if she were some mythical ghost like The White Lady—as “The Lady of Eighth Street.” The other was a man I passed whenever I walked down Fourteenth Street, always sitting in front of a Duane Reade with at least one other person on a piece of cardboard, smoking or talking. I stood next to him on a street corner once, waiting to cross, and I remember taking a few slow steps away, as if standing there with a foot between the man and myself, his filth might levitate from his clothes and contaminate mine.

Confronted with both familiar faces in photographs, in a subway station where I did not normally see them, made me remember that they were people with personalities and lives. Somewhere, there is someone—some childhood friend or long-lost cousin—who stops and thinks of either of them, and wonders where they are. Both got their clothes from somewhere. They got their cigarettes from somewhere, and they probably grew up somewhere other than Eighth Street or Fourteenth Street. And after recognizing both faces on the subway station walls, I decided to be more aware of the people I noticed on the street, and to always put change in my pocket, instead of my wallet. I resolved to have money ready at hand for donating to subway car musicians and anyone cups holding cups out to me on the street.

If you’re a New Yorker, you’ve probably done it, too. You’ve been in too much of a hurry to stop and drop even your pocket change in the cup someone holds out to you, you’ve felt too introverted to give the person who sings on the train between Thirty-Fourth Street and West Fourth a dollar, you’ve skirted around someone hunched over a shopping cart full of trash bags because you weren’t sure what was actually in those bags. You’ve been there.

And multi-award-winning writer George Saunders has been there, too. In his speech for Syracuse University’s 2013 commencement, he relates a similar experience—one that took place in the classroom, but one that inspired a similar epiphany—a realization of his own aloofness. A push to be more openly kind. Whether your own epiphany occurs when you recognize familiar faces in a subway station ad, when you look back on an old classmate who dealt with teasing and bullying, etc., Saunders emphasizes the importance of awareness and kindness—especially regarding skinny dipping in a river in Sumatra.