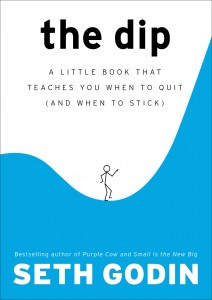 In 2008 I was going to give up on the National Political Do Not Contact Registry. I read Seth Godin’s book The Dip where he stated that most Ventures experience a dip.

And that most people give up in the dip.

I read the book,  it resonated with me,  I did not give up and the National Political Do Not Contact Registry won the Mashable Open Web Award in 2008 for the top non-profit to use social media.

And my social media consulting practice was born.

I wrote him to tell him about the impact of the book and he responded right away.

I’ll never forget the lesson or him.

~~~Shaun Dakin is a social entrepreneur and founder of Dakin Associates. In the Fall of 2007 he launched Citizens for Civil Discourse and the National Political Do No Contact Registry. By February 2008, he was testifying in the US Senate at the invitation of Senator Dianne Feinstein. And by the historic election of Barack Obama the registry had 500,000 members, and he had driven the national conversation around political robocalls.