Writing Down the Fear

For the past five years I’ve been talking about writing a book about my experiences teaching theater in the South Bronx. Again and again over the years, life circumstances have intervened and pulled my focus off the project. With a home full of three young children and a teaching career I can’t seem to fully hit pause on, there is always a reason not to write.

Still, the dream of the book has not died. And so, slowly and painstakingly over the last six months—sometimes in fifteen-minute chunks as I nurse a baby, or in a waking dream state after getting up with a sick kid, or on my now only once-weekly commute up to school on the D train—I’ve started writing it.

Mostly, the experience has been exciting and alleviating. What a relief, at long last, to be getting out of my own way and flexing a new set of creative muscles. What a joy to bear witness on the page to the lessons I’ve learned in the presence of my extraordinary students.

But there’s been a shadow side, too. 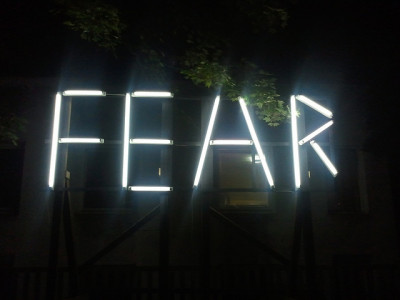 Up until now, the normal voices of self-doubt that have tried to derail me as a writer have always stuck to pretty banal scripts, weakly barraging me with garden variety stuff about how uncreative and untalented I am, and how nobody cares what I have to say. Those thoughts are mean-spirited and they can be paralyzing to be sure, but they’re usually no match for a couple of positive affirmations taped to the bathroom mirror and a daily dose of Anne Lamott or Natalie Goldberg.

Lately, though, as I’ve begun to double down on the project and allow myself to envision the possibility that my writing might one day, in fact, accumulate into an actual book—a real one, with a cover and an author photo and blurbs from people whose presence even in my feverish imagination convert me into an awkward, pimply, stammering teen… As I start to allow myself to visualize holding this book in my hands, the voices of self-doubt in my head have spiraled and metastasized. Their taunts have gotten piercingly specific. And breathtakingly mean.

Last night, the voices woke me up in a panic. For half an hour, I lay in bed, listening to them and gulping for air. I felt like my lungs were collapsing.

Finally, I got up and cracked open my laptop.

I talk a good game with my students about the creative value of going to the places that rub the most raw, engaging with the emotions that feel the most dangerous.

Clearly the moment had arrived to walk my own talk.

I sat at my kitchen table and made a list. Here is some of what I wrote:

1.   I am terrified that if I write this book and it gets published, my students will accuse me of neglecting them in order to lounge around my bougie Fort Greene brownstone, appropriating their stories and using them for my own profit and self-aggrandizement.

2.   I am afraid that if I write this book and it gets published, I will be pegged as yet another privileged white wanna-be savior swooping into the “ghetto” with a leather jacket and a soaring hip-hop soundtrack to save/enlighten/uplift/inspire her lazy/violent/angry/ignorant black and brown students.

3.   I am scared that even the act of giving voice to these fears reduces me to a played-out stereotype of self-loathing liberalism.

There was more. But you get the idea.

So here’s the thing.

It used to drive me crazy when I would tell people what I did for a living and they’d say “Oh wow, that’s so brave.” In a decade of working in the South Bronx, I’ve felt a huge range of emotions. Brave was never one of them.

But I’ll tell you what. Sitting at my kitchen table last night with that list glaring back at me, asking myself whether I still wanted to try to write a book that could widen past the suffocating vortex of my fears and the smallness of the stereotypes they carry, and hearing a small shaky voice in me answer “yes”? For the first time in ten years, I felt willing to take that compliment.