Anyone who participates in the gift-giving of the holidays is aware that the giving/getting balance is a difficult and complex one, as oftentimes giving is, in itself, rewarding. This month, we’re exploring the nature of that relationship and the many experiences of those involved in all sides of the gift-giving/getting process.

The silhouetted characters were changed to a female and male to add diversity. Also to reduce animation time and clutter only the fish “jumped” out of the box.  The addition of the fishbowl was made so that the two characters had more interaction between themselves. 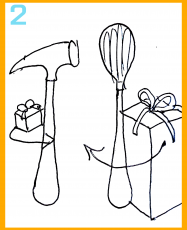 We contemplated using the tools for this animation however we felt that silhouetted people would work better, as well as give us a more intimate and seasonal touch.

The animation for this gif was created using Adobe After Effects.